The .world file's name and folder location that is specified inside the .worldpkgdesc file and other parameters can be amended with a hex editor or the IWTE tool.

Location and Name of .worldpkdesc files

The packagedb.txt file determines where the game will search for .worldpkgdesc files. Its normal contents are;

which means the game will search inside

if you add a copy of the packagedb.txt to your mod-folder it will also search

Contrary to popular belief the naming of the files and folders in /settlements is completely irrelevant to which culture uses which building. You could call a set of files/folders "Freds_custom_thing.****" and have that settlement turn up for Northern_european factions' towns if you set the contents of the .worldpkgdesc correctly. Likewise, the .worldpkgdesc doesn't have to be in the same folder as the .world it calls. The reason for naming files/folders after cultures and city levels, and placing the relevant pkg in each is purely for ease of understanding what is meant to be turning up where!

view of .worldpkgdesc in hex editor

The .worldpkgdesc files can be edited with a hex editor. A typical view of a file in the XV132 editor is shown on the right. Note that each string is preceded by an integer that gives the number of characters in the string, e.g. as shown the integer 17 for the string 'northern_european'. Editing the file with a hex editor is more difficult than using IWTE, but a hex editor can also be useful to quickly view the file contents. 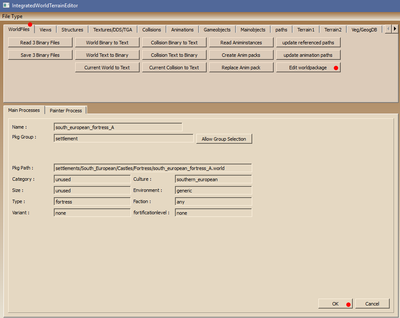 A typical view of a .worldpkgdesc open for editing in IWTE is shown on the right. If the 'OK' button is clicked IWTE saves a new version of the file with _WD added to the end. This file will be functional - see note about file naming above - if you no longer need the original file you must delete it.

Not all of the possible content types are included in each .worldpkgdesc. They can be added in if required, doing that via hex-editor is slightly complicated by needing to also add an integer for the count of the types used. IWTE will do this automatically for you, and by default displays all the possible types with 'unused' for the unused ones.

This is used to select a settlement or individual building or ambient in the battle editor.

This is the path to the .world file the pkg will call, e.g.

For techtrees only. The categories used in the vanilla settlements are;

However, you can use any category name you want, to get the techtree building to appear this must match the name of the techtree slot in the settlement.

For techtrees only. The sizes used in vanilla settlements are;

You can add different sizes but to get the techtree building to appear this should match the name of the techtree slot in the settlement.

Theoretically, if you change your techtree slots and packages to say 62x62, then that should stop the vanilla 64x64 building models appearing, unfortunately however, if you don't have anything that can fill those slots for a particular settlement the game can be 'overenthusiastic' in its interpretation and still put the 64x64's in!

name of building in EDB for techtree

For techtrees the 'type' name required is the internal name of the building from export_descr_buildings.txt in the example shown in the picture that would be c_cannon_maker

Editors note: Explanation for fort use needs to be added here.

This needs to be the internal name of the culture you want to use the settlement etc, e.g. northern_european, mesoamerican. From vanilla cultures the following culture names work as expected:

The 'greek' culture and 'eastern_european' do not work if used in the culture slot, they have a hard coded default as follows;

If you have added a new named culture, or changed the internal name of an existing one, the new culture name can be used here.

This needs to be the internal name of the faction you want to use the settlement etc.

Use of this function allows one faction in a culture to use different buildings from the other factions in that culture.

Intended to alter the fortification level, e.g. use of arrow versus canon towers. Doesn't seem to work.

To get one faction, or the problem eastern_european and greek cultures to use a different settlement model in custom battle from their culture's default model, make a .worldpkgdesc file for EVERY faction in the affected culture. See notes in faction section above for how to code EE and greek factions.