The .worldterrain file primarily provides the height information for the battle map terrain under settlements and ambients.

The file also applies merge values which influence the rate at which the terrain under the settlement blends with the surroundings. The file also provides paths to the masks and textures applied to the area. The path and name of the .worldterrain file to be used is recorded inside the .world file.

See this tutorial by wilddog for further information.

The height values given in the .worldterrain file are just a series of float values with a number of rows and columns. They are applied by the game at (in milkshape equivalent terms) 8 metre spacing, using a hardcoded pattern of triangles. From experimentation this pattern is as shown in the image below; 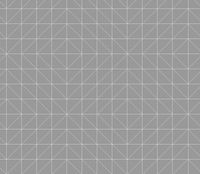 You will see this pattern if you use IWTE to export a .worldterrain to ms3d or use the 'show triangles' function in the 2d editing window. The pattern can make it hard to obtain smooth gradients in certain locations and directions...

The .worldterrain files for settlements also contain a notional flat plane at 0 height which has a fixed size (around the same area as the playable battle-map). This notional plane has merge values, again from 0 to 1.0, which influence how much of it is used. This is why vanilla settlements tend to appear on a large flat area even if the campaign map where they are sited contains mountains or valleys. The mechanism is used to ensure that attacking and reinforcing armies can always reach the settlement without being stuck up or down a cliff! If you extend the size of the .worldterrain file to cover beyond the playable battle-map area, with around a 251 x 251 file, and control the heights out to the edge of that you can enforce a completely accessible area without the flat plane taking effect.