Armenia is one of the factions in Rome: Total War designed to be non-playable. However they can be made playable by simple modifications to the game files (more information on which can be found here). 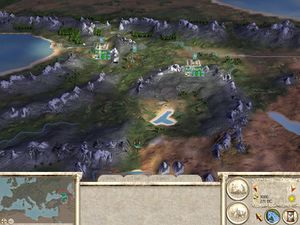 Armenia begin in modern day Armenia and Georgia, north-east of Pontus, south-west of the Scythians and to the west of Parthia. 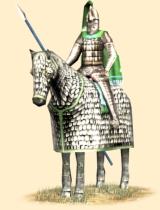 Armenia is a heavy cavalry focused faction. They get some very good missile cavalry choices, including long ranged Cathaphract Archers! They also get regular Cataphracts as well, however, they don't have a light cavalry unit that can fight in Melee. Their starting infantry is similar to Parthia, meaning it is terrible, but they get some better choices later on. Their foot archers and siege weapons are average. Armenia is a very good faction with unmatched Armoured Horsemen, along with decent infantry support.

Heavy Spearmen: Can be recruited from City Barracks. Useful to pin the enemy if their formation is deep since they are not in the same class as hoplites or phalangites. The deeper the formation the more time you give your cavalry to deliver a decisive blow.

Armenian Legionaries: Can be recruited from Army Barracks. If you want to avoid your Heavy spearmen to become pila fodder send these guys forward to take pila fire and give the Romans a taste of their own medicine with volleys of pila. Can delay infantry trying to flank Heavy spearmen but cannot win on their own.

YOU can help us improve this Wiki! ~ Look for Ways to Help and Things to Do. ~ If you need further advice, please post here.
Retrieved from "https://wiki.twcenter.net/index.php?title=Armenia_(RTW_Faction)&oldid=83213"
Category: