Difference between revisions of "Blender for IWTE"

The .world contents are exported using .dae format which can be opened by 'Import Collada' in Blender as standard. To return your changes to IWTE use the Export Collada (.dae) option in Blender.

.dae files can also be imported into 3dsmax but the IWTE team are not directly supporting use in max. Some functions such as naming conventions for textures and animation groups may not work in Max and may require you to post-process files via Blender.

The export/import menu for Collada is accessed as shown below. To export M2TW .world assets load the 3 binaries first and use one of the export options. For import load (or keep loaded) the same 3 binaries and use the import button. Please, try not to change too many things at one time!

If you leave the group names unchanged IWTE will assume they are meant to be the same objects and will retain all previous collision/effects/perimeter/main-object type information for them.

Additional new objects should be children of a box with Complex and a number in the name. If you end up with two Complex parents with the same first number, e.g. Complex 7 and Complex 7.001 (due to Blender's auto re-naming of copies) all the contents will end up in the same Complex.

If the end result of your edits has assigned objects to Complexes that aren't geographically related to them use the 'Reset Complex Blocks' button under 'World Edits' to reset things into CA style strict complex positioning.

You will need to 'Save 3 Binary Files' to save your changes after importing items via Collada.

World objects are exported as 'children' with a notional box representing the complex acting as 'parent'. To clear the view of the parent boxes in Blender, hold shift and select all the complexes in the Outliner. Hover mouse over main screen and press Ctrl I to select inverse, and Shift H to hide unselected.

World objects with multiple groups are exported with the Group0 as the parent for any subsequent groups. To create new multi-group objects follow the same procedure and make the undamaged version the parent.

World structures are not presented separately. They are reformed on import back to the .world by separating the objects that use the same texture within a complex into the separate structures.

To remove a group from its parent, select in main window, right click to get parent menu and 'clear parent' - you'll need to use the 'keep transform' option to avoid the group/s moving to a position relative to 0,0,0 instead of the parent's center.

To add a group/groups to a parent select the children first, and the intended parent last (holding down Ctrl to allow multi-selection) then in main window ctrl P to open parent dialogue, select "object" option.

To view and set shading for a single group switch to plain shaded view (not textured) select object group in 'object mode' switch to 'vertex paint' mode. The vertex paint mode only works on the pre-selected object group, selecting a different object from the drop-down menu will take you back to 'object mode'. Please use greyscale for shading. Unfortunately, Blender does not provide a mode where you can change the vertex shading of more than one group at a time! This makes it difficult to set the same shading across multiple objects...

If you changed animations via milkshape previously you'll be aware that some things needed to go in comments, Blender/Collada doesn't allow group comments! So instead name the MESH groups in Blender as follows: 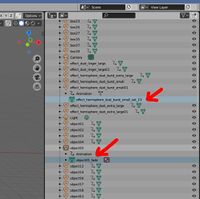 For an effect start with effect_ then the exact set name including the _set then _time that's time in 10ths of a second so 23 = a 2.3 seconds start time.

For objects you want to fade add _fade to the end of the mesh name.