Britannia are one of the playable factions in Rome: Total War. They can be played by successfully completing either a long or short campaign with any of the Roman factions, by destroying them in the Imperial Campaign or by editing descr_strat.txt (more information on which can be found here). 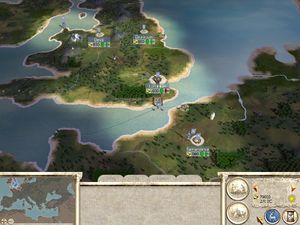 Brittania begins in the British Isles. (Click to enlarge)

The Britons start in the British Isles, controlling the entire island of Britain. However Ireland is controlled by the Rebels. 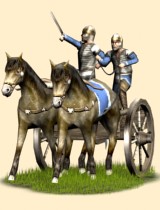 British Light Chariots: Can be recruited from Blacksmith. These men are chariot archers, fast and mobile, and are deadly against enemy archers when in cantabrian circle.

British Heavy Chariots: Can be recruited from Weaponsmith. These units are the Briton's only recruitable non-general heavy cavalry unit. The fact that they are chariots means that they can shred enemy cavalry and demoralize other enemy units. Watch out for enemy phalanxes, however.

Head Hurlers : Can be recruited from Sacred grove of Andrasta.

The Head hurlers have an armour piercing missile attack and are also good in melee. Highly mobile because they dont wear armour they are vulnerble to archers and must come close to the enemy if they want to throw missiles.

Woad Warriors : Can be recruited from Shrine to Andrasta. Woad warriors follow this simple rule: attack is the best defence. Excellent attack but very poor defence.

Very cheap unit that can disengage from an enemy if the enemy begins to surrond you.

YOU can help us improve this Wiki! ~ Look for Ways to Help and Things to Do. ~ If you need further advice, please post here.
Retrieved from "https://wiki.twcenter.net/index.php?title=Britannia_(RTW_Faction)&oldid=83214"
Category: