Carthage is one of the playable factions in Rome: Total War. They can be played after successfully completing a campaign as a Roman faction or by simple modifications to the game files (more information on which can be found here). They have powerful heavy infantry units and war elephants, however they lack strength in missile and light infantry, thus giving Eastern factions a definite advantage over them. 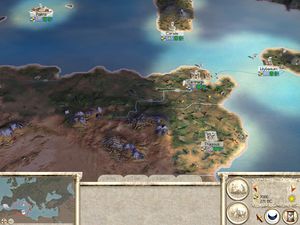 Carthage owns an area in Northwest Africa around the area of Tunisia, portions of southern Iberia, and some of Sicily. 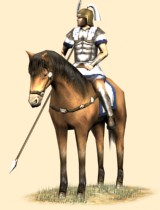 Carthage has a roster that is stronger at the higher tiers. Their early units are all poor compared to the neighboring Greeks, Romans and barbarians. Their first couple infantry units in particular are really bad units, and the next one is still not that great. They also have weak missile troops except for mercenaries, such as Balearic Slingers in Iberia. In the early game they rely on mercenaries, clever tactics and Elephants from Carthage itself. Since Carthage is spread out they can get a good selection of mercenaries. In the later game they get access to far better regular units. They get Sacred Band Infantry and Cavalry, two very strong elite units, as well as improved Elephants. Their siege options are also very strong. The city of Carthage can get elite units earlier because it grows extremely quickly due to the good soil.

Poeni Infantry: Can be recruited from Army Barracks.

Sacred Band: Can be recruited from Awesome Temple of Baal.

Sacred Band Cavalry: Can be recruited from Royal Cavalry Stables.

Libyan Spearmen: Can be recruited from City Barracks.

YOU can help us improve this Wiki! ~ Look for Ways to Help and Things to Do. ~ If you need further advice, please post here.
Retrieved from "https://wiki.twcenter.net/index.php?title=Carthage_(RTW_Faction)&oldid=83195"
Category: