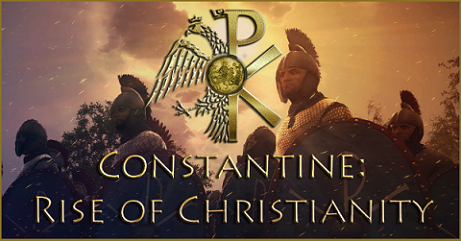 It was started on the 13th of November 2013 by Dresden with v0.1. A new version was released on the 15th of April, and is still receiving updates.

The mod was created by Dresden with a help of a few other members. It offers a new campaign that is set in 311 A.D. where the Roman Empire is controlled by four men. You are able to play as the controllers of Rome, and other factions that were alive during 311 A.D. Religion now plays a role in the campaign as each of the factions will have different kinds of religion such as Christianity. Certain units have been changed to suit the time period of the campaign. The mod is not compatible with Divide Et Impera, All Factions Playable, Radious Overhaul, and any Turn Per Year mods. A new campaign is needed in order to play the mod once installed

A campaign that is set during the Tetrarchy: Civil War in 311 A.D. Each year lasts 12 turns. There are 12 playable factions during the time period where each faction has its own religion, and leader with a unique appearance, and traits.

Certain unit types have been remade, and added in order to fit the historical time-frame including the unit cards and an increase in unit size. Battles tend to last longer, and units now feel the effect of fatigue.

Ruler of the Roman West. He controls all of Gaul, Hispaniola, Numidia, and Britain. And is a next door neighbor to Maxentius.

Ruler of Central Rome. He controls all of Italy, Sicily, and North Africa. He is between Constantinus, and Licinius.

Ruler of Greece. He controls what was left of Greece.

Ruler of Eastern Rome. He controls minor Asia, and Egypt. He is between Licinus, and the Sasanian Empire.

Rules what was known as Parthia. Is next to Maximinus Daia.

YOU can help us improve this Wiki! ~ Look for Ways to Help and Things to Do. ~ If you need further advice, please post here.
Retrieved from "https://wiki.twcenter.net/index.php?title=Constantine:_Rise_of_Christianity&oldid=79306"
Categories: