Inspired by the incredible game that was Demon Soul, Killerbee decided to created a mod based on it. For those who haven't played the game, here's the background story:

King Allant the Twelfth brought unprecedented prosperity to his people by channeling the Soul Arts. However, in his lust for power, he awakened the Deep One, and with it, a horde of Demons. The Demons hunt for the human's souls. Those who lose their souls, lose their minds. Those who lost their minds attack the sane, and chaos reigns. The Demons feed themselves with the power of a human soul. And the power of a mature Demon's Soul, is beyond imagination. Boletaria was shrouded in a deep fog, and those who dared enter, never returned. Until Vallarfax of the Twin Fangs broke free, and told the rest of the world of Boletaria's plight. Many heroes, including Biorr of the Twing Fangs; Sage Freke, the Visionary; Saint Urbain; Yurt, The Silent Chief; Saint Astraea and her loyal knight, Garl Vinland; and many more. But there was one who broke free - a sole knight. Will you be the saviour of the world ? Or will the Demons find a new slave ? 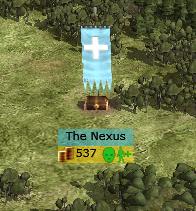 The mod aims to recreate the world of the Role-Playing Game for the PS3 : Demon's Souls. Demon's Souls is a fascinating world, with tonnes of interesting enemies, and especially huge monsters. You start off as a small, tiny little guy, and that's generally how you feel throughout the game. If at a certain time you feel awesome and strong, the game does a good job in making you feel like a tiny worm again by unleashing a beast that's eight times as big as you. The mod strives to recreate the loneliness that occurs in Demon's Souls, as well as the Role-Playing Element.

The game is completely different from all mods on TW. It focuses mainly (and only) on the RPG-aspect, which becomes clear the moment you enter the game. You need to make a choice immediately, and it's a quite important one as well. You can choose between 3 classes, each with their own (dis)advantages and strengths.

As you progress throughout the game, the necessary reinforcements will be supplied by the "Treasures" you find along the way. Treasures are settlements in their lowest form, meaning villages, inhabited by only 400 villagers (the game's minimum). Treasures yield a reward, and, upon conquering them, you will get that reward. However, the treasures will be guarded by a garrison, depending on the value of the treasure - so players will have to make sure that what they lose during the fight for the treasure, is worth less than the actual treasure. If you keep losing more men than you can pay with the treasures' reward, then you'll be armyless and bankrupt immediately. Treasures contain all sorts of values, like different types of armor, units, and money.

The units' system is also different. Depending on your first choice, you will start off with the ability to create different types of units. If you chose Soldier, you will only be able to create units with Platemail Armor (strong but expensive armor). If you chose Wanderer, however, you'll start off with the ability to create cavalry, but you'll have bad armor, etc. These bonuses can be found in the treasure-settlements, so you can still create horses if you chose Soldier in the beginning. 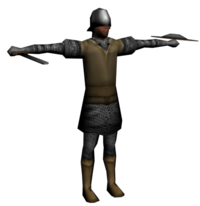 The Units system is pretty easy - there are several types of armor :

Fluted Armor (either this one or Plate Mail for vs.1)

The units are only available in the settlement in which you found the armor - meaning that if you found the Plate Mail treasure on the map, you can only create units armed with Plate Mail there. If you chose Soldier in the beginning - who are equipped with Plate Mail - , you can create Plate Mail units in the Nexus, BUT ONLY PLATE MAIL UNITS. You'll have to find the Leather armor treasure to create cheaper units ! The Wanderer and Hunter both start with leather, but Wanderer also has stables (which would also be a treasure), and Hunter has archery ranges (again, would also be a treasure).

Each armor has x (needs to be decided for the first release) kinds of units, and could include :

Halberdiers (which are essentially the Pikemen of Med2)

Each armour has it's advantages and disadvantages -

After playing the game Demon's Souls, I thought it'd be cool to create a RPG-mod for TW, and the game was a great theme for that. Then it was just a matter of thinking about the way it would work, etc..

The thread can be found here Demon's Soul: Total War

YOU can help us improve this Wiki! ~ Look for ways to help and editing advice. ~ If you need further advice, please post here.
Retrieved from "https://wiki.twcenter.net/index.php?title=Demon%27s_Soul:_Total_War&oldid=79408"
Category: