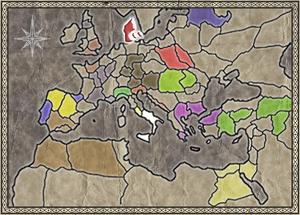 Weaknesses: Like the Scots, has only one region to begin the game with and no castle. Scandinavian regions are not as profitable as others and lack valuable resources. Very close to their toughest rival, The Holy Roman Empire. Quite far from the holy lands and somewhat isolated from the rest of the world, which some may se as an advantage. later in the game they may also be threatened by the mongols, which the danish may have problems dealing with.