The mod started out as a companion mod for Ars Gratia Artis (AGA) in battle mechanics and unit textures, until the the team realized that it has become more than just a companion mod. It had become a fully fledge project with the same dedication, and passion that other highly-esteemed Total war mods are known for. It released its first version on November 18th 2013.

Divide et Impera(Divide and Rule) brings a lot of changes to Total War:Rome 2 by altering the battle, and campaign mechanics. With better graphics, a new reform system, faction overhaul, longer and intense campaign, realistic unit behaviour and an emphasis on strategy. It is not compatible with mods that change battle dynamics, campaign dynamics and external unit packs.

DeI allows users to make any changes to the mod to suit their taste. It uses its own version of TTT, and gives a graphic overhaul to the units to potray a more accurate appearance during the era. Thanks to the new battle mechanics the AI will appropriately use unit formations when necessary to attack the player while getting rid of the "arcade" abilities. Making strategy essential for victory. 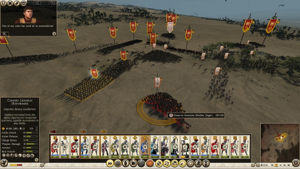 Siege has been greatly improved making it more exicting and realistic so that players can now look forward to a siege as the AI now mantains siege for 2 turns with a ton of siege equipment. With the New Barricade system, there can now be more deployables be placed in strategic points so that the AI does not crush through through the walls.

The auto-resolve mechanism has been revamped making the attacking army lose less of their men towards attrition, while the defenders lose more than the attackers as the more turns the attackers lay siege, the greater the chance of the attacker winning through autoresolve.

A new technology tree has been introduced known as "Better Siege Tactics" that replaces the old "Battering Ram" tech. This reduces the time for a hold-out which increases for every tier in the Siege technology.

Siege equipment are now harder to ignite and to destroy, but the durability of the walls and gates have also been increased while the damage of the watch towers has been reduced although the frequency of the fire is increased. It now takes longer to capture the gates, and towers.

There are 25 playable factions with their own strength, and weaknesses as well as its own fighting style where the stances of the army (Offensive or Deffensive) affect the battle's pace. Therefore it is best to learn every faction's strength as each battle will not be the same. Each Faction have their own specialized UI, known as Culture UI, in both Campaign and custom battles that fits the factions colors and culture 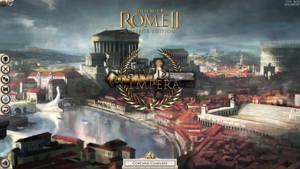 All units from each faction have been improved to have more variety and realism with more faces, skins and cultural outfits for the units. This includes garrisons as well where the barbarian factions will have a mix of men and women defending a city.

DEI v 1.0 introduces Shield Extravaganza to its mod that replaces all the shield designs in the vanilla game of Total War: Rome II which has a total of 150 shield designs making the majority of the units have a different shield design. AS well the team has redone the unit cards completely going back to the previous unit cards of the Total War franchise with each card demonstrating what the unit really looks like during battle.

New textures created by Meneros is used for in DeI which replaces the armour textures for the majority of all units.

YOU can help us improve this Wiki! ~ Look for Ways to Help and Things to Do. ~ If you need further advice, please post here.
Retrieved from "https://wiki.twcenter.net/index.php?title=Divide_et_Impera&oldid=77647"
Categories: