DragonDawn originally Dragonborn is a full conversion of Medival Total War II: Kingdoms, set in the Universe of Dragonborn. Dragonborn is a unique and non-commercial High-Fantasy setting that was written over a period of ten years.

Development of the Dragonborn: Total War mod for Medieval II: Total War: Kingdoms was started on July 12, 2011, when the first preview of the mod and its world was released. Squeaks and team worked on the mod ever since, and on October 10, 2011 the first thing was released: The battle of Haagen Pike. The next release, another battle, was on December 23, 2011. The Battle of Elder Wood, as the battle is called, was patched on December 27, 2011. After that the releases fell silent, while the mod team was busy with the other aspects of the mod. On December 23, 2012, the re-preview of the mod was released.

Dragonborn: Total War is a mod that focuses on the World of Dragonborn, a vast world inhabited by men and an even older race of creatures, known as the Elent. This conversion of the original game offers a new map, new units, and new battles all in the style of the Dragonborn universe. 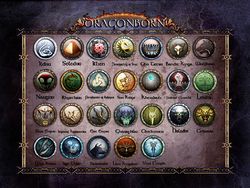 This whole game is completely new, leaving nothing but the skeleton of the original game and rewriting the whole of the game.

The mod even features its own world and lore, in a very detailed manner. Every faction has its own history which is taken into account when actually playing the game.

This mod features 26 factions, every one with its own story, cities, strengths and weaknesses. The Empire faction has been split up into three parts due to its size. The Demesne of Men exists of 16 factions in total. The Elent, a race even older than men, with magical powers, exist out of ten separate factions.

Every single unit in the game has been made by the mod team, along with the whole world and all the battle maps. This adds to the feeling of a whole new game, which Dragonborn: Total War pretty much is.

The first Dragonborn Playable Battle; the Historical Battle of Haagen Pike,involving the Wolfborn and forces of the Eastern Empire was released here in October 2011.

The second battle "The Battle of Elder Wood" - A Historical Battle featuring the Lindiri forces of Lord Willow vs The Sun King was released here in December 2011.

YOU can help us improve this Wiki! ~ Look for Ways to Help and Things to Do. ~ If you need further advice, please post here.
Retrieved from "https://wiki.twcenter.net/index.php?title=DragonDawn:_Total_War&oldid=79305"
Categories: