The Eastern Roman Empire is one of the playable factions in Rome: Total War's expansion Barbarian Invasion.

In 330 AD, the capital of the Roman Empire was moved to the ancient city of Byzantium, situated between the Golden Horn and the Sea of Marmara. Constantine renamed it Nova Roma, and after he died in 337 AD it was named Constantinople in his honour.Constantine also converted the Romans to Christianity.

For decades the Roman Empire had struggled to maintain control over its vast territories. Splitting the Empire into West and East was a logical solution, however the West was, in general, more vulnerable and less wealthy than the East.

The "founding" of the Eastern Roman Empire has been placed at several key points. Some historians claim it was formed at the founding of Constantinople in 199, others the ascension of Theodosius as Eastern Augustus in 395.

The Eastern Roman Empire lies between Europe and Asia and connects Orient and Occident. Due to its location, it has developed a unique culture and military. It combines the power of eastern cataphracts and horse archers with the discipline of Rome's legions. While the Empire's primary enemy is the Sassanid Empire to the east, the approaching barbarian hordes may become a considerable problem as well. Furthermore, if the people are unhappy and revolt a Roman shadow faction - namely the Eastern Empire Rebels - can emerge; they are a dangerous enemy, as they have powerful Roman troops as well.

The Eastern Roman Empire start the game as occupiers of much of Southeastern Europe, also holding land in Asia Minor, the Levant, and North Africa. 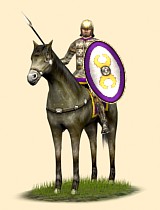 At the start of the game the Sassanids to the east will pose the biggest threat. However, you are rich and strong enough to take them out in 10 - 15 turns.

Once the Sassanids have been taken care of, invade North Africa. The WRE will have few troops here and it's four more provinces.

After that just head into Illyria et Dalmacia and Southern Italy.

The Huns and Vandals may pose some threat to you, but the ERE can survive without its European provinces.

Overall the ERE is a relatively easy faction to play as, provided you know what you are doing.

However, while your main threat is to the east, make sure that you are in a good position in the west. The Western Roman Empire has some excellent provinces, and although they field an excellent army, their generals are weak, which should make defeating the western empire much easier than the Sassanids. However do not be over confident when it comes to fighting the WRE; as said earlier they field a might army of good quality infantry. However their weak point is their lack of decent cavalry, which means that your excellent eastern style cavalry will totally destroy both their infantry and their cavalry. The exception to this are the generals' body guard cavalry, which are excellent despite their poor commander. The German Imperial Guards are more than a match for any Easterner cavalry, however once their general is killed the guard will quickly flee the battle.

YOU can help us improve this Wiki! ~ Look for Ways to Help and Things to Do. ~ If you need further advice, please post here.
Retrieved from "https://wiki.twcenter.net/index.php?title=Eastern_Roman_Empire_(RTW:BI_Faction)&oldid=70191"
Categories: