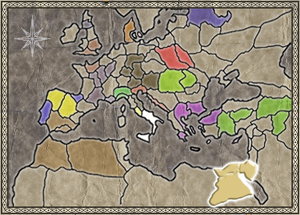 Egypt controls their traditional lands around the Nile River.

Strengths: Powerful Mamluk cavalry, both melee and ranged. Access to both Tabardariyya and Hashishim units, also has access to the powerful Naffatun. Very wealthy regions with even wealthier ones easily conquered to the North-East. Very defensive and favourable desert terrain, easy to hold an enemy at bottlenecks.

Weaknesses: Will most likely be at war with either the Turks or the Moors at some stage. Has to fight for dominance and commit a sizeable amount of men and resources to secure the holy lands. One of the first few factions to come into direct conflict with the Mongols and the Timurids. Lacking in strong early period units. A prime target for the Catholic crusades.

Conclusion: The Egyptian empire must very quickly expand to survive. The holy lands to the north-east must be taken immediately if victory is to be assured. Once these lands are part of the empire, they need to be fortified and well defended and ready to face the hordes of enemies that come to claim them. Turkey will have to be dealt with at some stage in the campaign, when the Egyptians encounter them is up to the player and their pace. The Moors will on the odd occasion begin to look menacing from the West and may need to be taught a lesson or two to prevent Eastern expansion. If Egypt can secure wealthy lands and weather the oncoming storm, of Eastern invaders and the crusading Catholics, the empire will be in a good position to bounce back in full force and embark on a quest of world domination through Eastern Europe and Asia.