This article is based on the first part of The Complete EDCT/EDA Guide for Rome:Total War the original article was written by Squid and imported with his permission. The article may have been altered since import - please refer to the history page for details of changes, or reference the original document.

This is an in-depth explanation of the export_descr_character_traits.txt file, which is the primary base for modding buildings and determining which units can be recruited from them.

Squid put the original article together for his own reference, but decided to open it up to all, with the request that they also aid in improving and adding to it. If you are not at all familiar with the basics of the EDCT file then you should become so before reading this. The file works alongside a good few other files and may not have the desired effect if these associated files are not modded.

Please help make this the one-stop source for EDCT-related information. This Wiki article can be updated to include further information but please also post your comments, corrections and additions in the general forum of the Org RTW Workshop in this discussion thread.

EDCT contains all the information about traits and how they can be acquired. The file is split into 2 sections. The first section is the Trait Section, this section contains the information about the individual traits, including which characters types can acquire a trait, which cultures are precluded from acquiring a trait, if the trait can be seen, which traits are mutually exclusive (i.e. both traits can't be had on the same character), what effects the trait has at its various levels, as well it lists which text entries from the related export_VnVs.txt file are to be used when displaying the trait.

Each trait is broken into two distict sections the header section, and the levels section.

In EDCT a line with comment on it must begin with a ; (semi-colon)

So let's examine the Trait Header line by line:

This is the name of the trait, it must be unique, no two traits can share the same name. The name of the trait can be used in the AntiTraits line below, in an Affects line in the trigger section, or as part of a condition for a trigger in either EDCT or EDA, the one other place where Trait_Name will be used is in descr_strat.txt to specifiy the starting traits for the various characters.

CTD Alert: If the second line of the trait is not the Characters line you will get the following CTD.

Optional, this line is added when you don't want the trait to be listed on the character information screen (i.e. recruitment screen, right-click character portrait, etc).

Optional, this line is added when you want to exclude certain culture group(s) from being able to acquire a trait. The cultures on the list should be taken from the descr_cultures.txt file. If listing more than one culture they must be listed as a comma seperated list of cultures.

NoGoingBackLevel should be used whenever a trait has an antitrait and you expect the trait to actually acquire points of its own and not just reduce the points of its' AntiTraits, see the bug alert below for details. In other words if you have trait that is an antitrait to second trait for the purpose of reducing the second trait to 0 points then a NoGoingBackLevel is not needed.

Example: If you have a trait A with an antitrait B and A has a NoGoingBackLevel of 2, then once you get enough points to get the second level of trait A, points you acquire towards trait B will no longer reduce your points in trait A, but any points you get towards trait A will continue to accumulate.

Bug Alert: There is a nasty bug with AntiTraits, I'd explain it, but Player1's explanation is much better, so I'm just going to quote it from his BUG-FIXER:

Bug Alert: The game engine does not check for the validity of your anti-traits list, so an undefined or misspelt antitrait will still let the game load. Misspelt traits will obviously cause problems as both traits can be acquired by one character. I do not know if undefined trait in the antitraits list causes any issues.

CTD Alert: One CTD in the header that gave me fits trying to solve was that I'd inadvertantly misordered the lines in the header section. I got the following error from -show_err:

The line the error was refering to, was the first instance where I had a condition of the form Trait ABC = # or FatherTrait ABC = # in either EDCT or EDA. What misordering the lines had done was to make the engine not recognize any trait that came after the trait with the misordered lines even though it parsed them without any error. The not recognized trait may even have been in an Affects line before the line in question but that wouldn't get caught.

Note: Any trait without a level might as well be hidden since it won't ever be acquired and the only use they have is to make other traits go back to 0 points.

If you look at the following image, you'll see how some of the trait information actually looks in game: 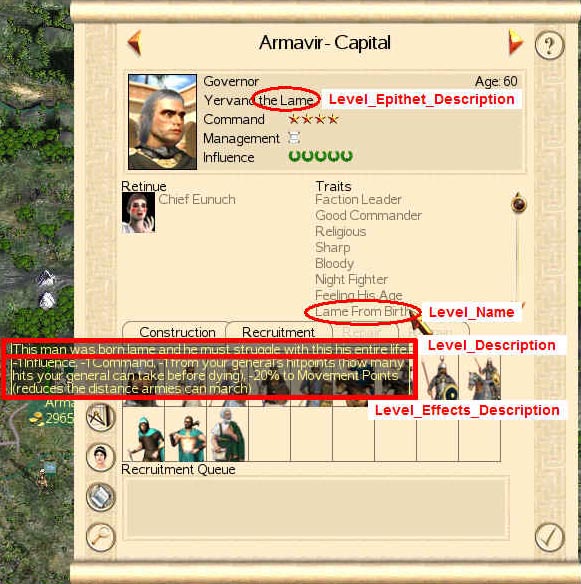 If some of this doesn't yet make sense, keep reading and I'll fill in the details as I go along.

File Linkage: For each of the lines up to (but not including) Threshold, you will have to have a corresponding line in the export_VnVs.txt file of the form:

CTD Alert: For any of Level_Name, Level_Description, Level_Effects_Description, Level_Epithet_Description if the corresponding entry in export_VnVs.txt does not exist (or is misspelt), then if a character acquires the trait with a missing/incorrect entry a CTD will occur if you try and view the character details screen (i.e. right-click on character portrait, open recruitment window, etc).

Note: If you look at the sample trait level none of the lines from Level to Epithet need to be unique. This means that multiple levels in the same trait, or levels in different traits can have the same values for any or all of those lines. This is a great way to cut down on the size your export_VnVs.txt file.

So let's examine a Trait Level line by line:

The Level line is the line that you see in the trait window (when you right-click on a character portrait, open the recruitment screen, etc).

The Description line is the line that provides the description of this level of the trait. It is visible in the trait window when you mouse over the Level_Name on a character's trait screen.

Th EffectsDescription line is the line that provides the list of effect that this level of the trait provides. It is visible in the trait window when you mouse over the Level_Name on a character's trait screen.

Optional, if the GainMessage line is included with the level of a trait, then when a character acquires that level an event message will appear with the text from this message.

Optional, if the LoseMessage line is included with the level of a trait, then when a character has reached a level of trait with a LoseMessage line, and the character acquires enough points in an antitrait that it reduces the number of points they have in the trait below the Threshold value, then an event message will appear with the text from this message.

The value given for trait points, is the number of points a character needs to accumulate in order to acquire that particular level of trait. The hardcoded minimum threshold value is 1.

Optional, Each trait can have zero or more Effect lines. Each Effect line can have a positive or negative effect on the associated attribute.

For the complete list of attributes go to: Trait/Ancillary Attributes (RTW)

The trigger section is read sequentially by the game engine. This means that for two triggers with the same event (WhenToTest Event_Name) the one located closer to the top of the file will trigger first.

Let's examine these one at a time.

This is the name of the trigger, no two tiggers can share the same name.

CTD Alert: If two triggers share the same name, when one of the triggers is triggered by the game, an errorless CTD will result.

Non-Functional Events: The following is a list of events which, while exporting the correct record, do not work or do not work as expected for traits:

Non-Functional Conditions: The following is a list of conditions which, while do not work or do not work as expected for traits:

CTD Alert: Certain conditions make reference to items defined in other files, such as EDB, sm_cultures, etc. Some of these conditions will produce CTDs if the items are undefined in the external files. Here are the CTDs that can be produced:

Each trigger must have one or more Affects lines. The Trait_Name will be given Trait_Points_Assigned towards reaching the Threshold of the next level of the trait Percentage of the time. Percentage is always a whole number (i.e. no decimals, no fractions, etc) between 1 and 100.

CTD Alert: There is a maximum of 11 Affect lines. 12 or more Affect lines will cause a CTD at game start. (Confirmation request)

Example: Affect Trait_Name 5 Chance 50 will increase Trait_Name (or decrease it's AntiTraits) by 5 points 50% of the time.

CTD Alert: Using an undefined trait in either the Affects line(s) or the Condition section will result in the following CTD:

YOU can help us improve this Wiki! ~ Look for Ways to Help and Things to Do. ~ If you need further advice, please post here.
Retrieved from "https://wiki.twcenter.net/index.php?title=Export_descr_character_traits.txt_(RTW_Modding)&oldid=82274"
Categories: