The Fourth Age: Total War - The Dominion of Men is a full-conversion & fully modfoldered modification for Rome: Total War - Barbarian Invasion inspired solely by the written works of J.R.R. Tolkien and known for its stability, innovation, balance, attention to detail, high replayability, and its faithfulness to the spirit and lore of Middle-earth as Tolkien envisioned it.

The modification's campaign begins during the fourth century of the Fourth Age and is based around the theme set out by Tolkien in his work, The New Shadow as found in The Peoples of Middle-earth. The campaign map covers the area illustrated in the official maps of Middle-earth in The Lord of the Rings novel.

The player can play as any one of 17 playable factions across a map of around 170 provinces organised into 23 different regions, each accessible province being home to either a standard settlement, a city of renown, or a permanent fort. Cultures include Dúnedain, Northmen, Barbarian, Haradrian, Elven and Dwarven, with the factions comprising the Reunited Kingdom of Gondor and Arnor, the Kingdom of Adûnabâr, the City-kingdom of Tharbad, the Kingdom of Dale, the Kingdom of Rohan, the Kingdom of Dorwinion, the Beorning Chiefdom, the Kingdom of Rhovanion, the Chiefdom of Rhûn, the Chiefdom of Norh Rhûn, the Chiefdom of Khand, the Chiefdom of Dunland, the Empire of Harad, the Principality of Harondor, and the Principality of Far Harad. A detailed trait system also divides family members into Subcultures and then down into various Tribes or Houses, all of which have an effect on the campaign. The mod also boasts Lordship Titles for governors and a highly sophisticated and organised trait system. Another unique element of The Dominion of Men is the presence of Landmark Features across the map that act as an in-game encyclopaedia of geographical features.

The Fourth Age: Total War was initially released as a series of cumulative modules: Corsair Invasion, Forth Eorlingas, and The New Shadow. The Dominion of Men is the final culminating base iteration, taking in all the map and factions of the milieu, and is the longest actively modded Middle-earth mod on the Total War engine, having its origins back in August of 2004. The modification developed with a view to creating something that did not yet exist - a PC strategy game that was faithful to Tolkien's world. 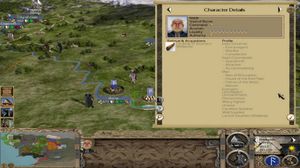 Kingdom of Dale family member, showing traits and lordship title. Note how the traits are clearly organised and also show a character's descent, house/tribe, alignment and season of life. Traits have a large influence on the game. (click on image icon below image if thumbnail not working) 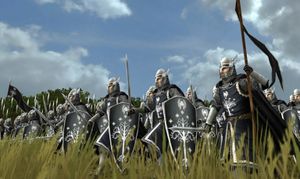 Men-at-arms of the Reunited Kingdom of Gondor and Arnor march across the Medieval II: Total War-like environments created for the mod. (click on image icon below image if thumbnail not working)

The Fourth Age Development Team made extensive use of the works and writings of J.R.R. Tolkien, The History of Middle-earth series by Christopher Tolkien, and Karen Wynn Fonstad's The Atlas of Tolkien's Middle-earth.

The developers also created other mods for the same engine, including Viking Invasion II, Norman Invasion, and Gods & Fighting Men, as well as being pioneers in modding research, tutorials and tools.

The Fourth Age: Total War is one of the most popular and iconic modifications on the Rome engine, having garnered hundreds of thousands of downloads in its lifetime. It continues to be enthusiastically supported by fans today. The modification won the award for Favourite Fantasy Mod for the Rome engine on TWCenter.net in 2006, 2007, 2008 and 2010. 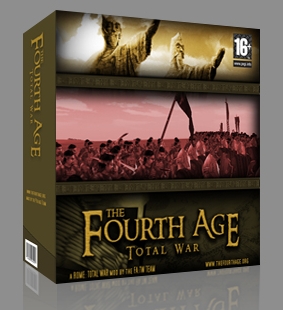 Cities of Middle-earth is an ongoing cumulative add-on that adds to the number of unique settlements on the battlemap as well as generally enhancing the modification based on player feedback.

"Rome: Total War was to be released shortly and there was a shortage of things to discuss on the message boards. We had already discussed and discussed all the screen shots, interviews, and other info Creative Assembly had released about their upcoming release. I was skimming through the topics on the boards when I came upon a thread about an idea. An idea that would turn from one discussion into one of the largest modifications in the Total War community. Being a fan of the books and Peter Jackson's movies I instantly took to the idea of modifying Rome into a Lord-of-the-Rings-style game. No other strategy game I have played has done J.R.R. Tolkien's writings justice.

With Rome, the massive scale of battles, the cities, the sieges, and tactics were already in place. We had the means to create something amazing. However, we knew that this would not be achieved without many hours of work. I shot some messages back and forth with the creator of the thread, Realm Lord, and decided that I should look around for others who shared our interest in making a LOTR modification for Rome. I didn't have to go far. I came to the SCC forums and immediately after posting a topic about our idea, Amirsan decided to host our mod. I had the luck of running into many talented modders. Spongebob created some of the first work ever done on the mod, including a variety of Orcs, Elves, and an awesome Mûmak. Another modder, Gutang, did some of our first work with the campaign map, a Ring-wraith unit, Riders of Rohan, and some very original Elves. TigerVX did an amazing job on the Easterling faction as well. WhiteWolf, who acted as the Art Director for some time, breathed new life into the project's graphics work. We lacked organization at the time and although we were getting loads work done, as a team we weren't going to be able to complete a total conversion mod the way we were going.

Our project was growing fast and filled with talented modders but we lacked the knowledge of Tolkien's works to make it a success. Then OncleJibi, a guy who possesses an amazing knowledge of Middle-earth, came into our mod. OncleJibi realized that the a game about the events that happened during the War of the Ring would not fit Total War's engine. The Ring could not be represented using the TW engine and we would have problems with overpowered factions such as Mordor and Isengard. We needed a setting with looser alliances, a free-for-all between all the countries of Middle-earth. From this idea came Fourth Age: Total War, a setting where no one country would be too much of a dominating factor. Mordor had been crushed, Isengard dismantled, and the strength of men had increased. However, new enemies would come in from the North, the East, and the South to make things interesting. In the Fourth Age, since Tolkien had written little about what transpired after the destruction of the Ring (the end of the Third Age), we were free to use some creativity.

Fortunately I've had the luck of running into many dedicated and gifted individuals that have helped greatly in not only keeping the project alive but turning it into something successful. We still have much work ahead, the cast has changed and will likely continue to in the future. However, as long as there is still interest in Tolkien's amazing world of Middle-earth and the great Total War series then there will be more success in this project's future."

The development team consists of these members (in alphabetical order):

Some past team members of note:

The team have a full wiki site where you can find out a lot more about the details of the mod (see our Official homepage link below).

YOU can help us improve this Wiki! ~ Look for ways to help and editing advice. ~ If you need further advice, please post here.
Retrieved from "https://wiki.twcenter.net/index.php?title=The_Fourth_Age:_Total_War&oldid=84182"
Categories: