Germania is one of the playable factions in Rome: Total War. They can be played by successfully completing either a long or short campaign with any of the Roman factions, by destroying them in the Imperial Campaign or by editing descr_strat.txt (more information on which can be found here). 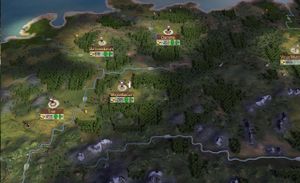 They start in the area south of Scandinavia with several villages and towns under their control. They are bordered by Gaul to the west.

The Germans have a unique roster that is very aggressive and is good particularly in the early game. They have excellent cavalry, the best of any barbarian faction except (arguably) Scythia which has horse archers. Their archers are pretty good, decent at firing, long range and can fight in a melee in a pinch. Their infantry is unlike any other factions. Their first infantry, Spear Warband, form a Hoplite like Phalanx and is the best tier 1 infantry in the whole game; they also have 240 men. They even have good morale, and are the anvil of your whole roster. All of the other German infantry is very aggressive, with a high attack stat and high morale but always a rather poor defense. German infantry do not wear any armour, which is unfortunate. The two most aggressive infantry units in the game are Berserkers and Chosen Axemen; both are exclusive to the Germans. The Germans also have a number of frightening units, such as Screeching Women, Night Raiders, and Berserkers. The German roster is geared towards using fear and brute strength to break the enemy before they can do much damage, and if this fails they take lots of casualties.

Spear Warbands: The men of a spear warband are effective against cavalry and most infantry, but lack the discipline of more "civilized" troops. They are the only barbarian troops that can form a phalanx.

Screeching Women: German screeching women think nothing of participating in a battle, wailing encouragement to their own men as they fight, and screaming defiance at the enemy to unnerve them.

Chosen Axemen: Double-handed axes are intimidating weapons, especially in the hands of chosen axemen. These men can hack a hole in almost any enemy battle line.

Chosen Axemen are usually the backbone of german armies in multiplayer. They have an armor-piercing attack and can thus wreak havoc on legionary cohorts and even Urban cohorts, provided that the cohorts have already used up their pila.

Berserkers: Berserkers are extremely ferocious, aggressive, indomitable warriors with no thought for personal safety once the rage of battle comes upon them. Once they go berserk they are capable of beating most standard infantry units one on one, their small unit size being the only limiting factor. But you have no control over them and they are also very expensive so be careful with them.

Gothic Cavalry: Gothic cavalry are an aristocratic - if such a word can be applied to barbarians - heavy cavalry elite of the German tribes.

They are the fourth most powerful cavalry in the game, but do not have a secondary attack.

YOU can help us improve this Wiki! ~ Look for Ways to Help and Things to Do. ~ If you need further advice, please post here.
Retrieved from "https://wiki.twcenter.net/index.php?title=Germania_(RTW_Faction)&oldid=83192"
Category: