The Greek Cities are one of the playable factions in Rome: Total War. They can be unlocked after successfully completing a campaign as a Roman faction or by simple modifications to the game files (more information on which can be found here). 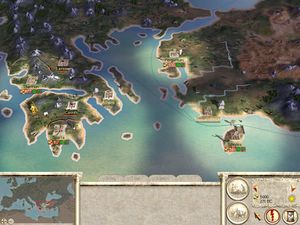 The Greek Cities start in mainland greece. (Click to enlarge)

The Greek Cities start with a few cities in mainland Greece, along with several colonies scattered around the Mediterranean and Aegean. They are bordered by the Scipii and Carthage on Sicily , Macedon in Greece and Seleucid Empire in Asia Minor. They are supposedly controlled by Sparta. This is because all the faction rulers have the title "of Sparta". (Example: Kleomenes of Sparta) The democracy is diminished for the Greek Cities are ruled by a king as their faction leader.

Greek Cities are as following: 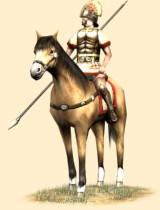 The Greeks are an infantry focused faction. Their strengths are very strong phalanx units that can crush infantry and cavalry alike and are also available early in the game. The most notable and strong Phalanx units are the very tough Armoured Hoplites and the Legendary Spartans. Their archers are average, though strong mercenaries are available locally. They also have strong siege weapons. Their cavalry is their weakness; it is the worst in the game and the only good choice is the Generals Armoured Bodyguard.

Spartan Hoplites: Spartan hoplites are trained from infancy to be nothing but soldiers. They are 'perfect soldiers' and nothing else. They can be trained only in cities of Sparta and Syracuse. Have a very low value in money.

Armoured Hoplites: Armoured hoplites are an elite among Greek soldiery, carefully selected and given the best training to make them superior spearmen. They are the third most effective spear unit in the game, after the Carthaginian Sacred Band and the Spartans.

YOU can help us improve this Wiki! ~ Look for Ways to Help and Things to Do. ~ If you need further advice, please post here.
Retrieved from "https://wiki.twcenter.net/index.php?title=Greek_Cities_(RTW_Faction)&oldid=83063"
Category: