Guy was offered patronage to become a Citizen by another member in 2007, but failed the vote. This lead to a 3 month absence to which he returned in 2008.

In the mid-period of 2008, he took a keen interest in assisting members with signatures and avatars, and became very much involved in graphical work on the fora.

Towards the end of 2008, citizenship arose again. After his patron J@mes left following some speculative confusion, Guy was left with an offer of citizenship but nobody to put it forward to the Consilium de Civitate. Empress Meg came forward and offered to be the patron. He passed without any No or Abstain votes[1].

Guy soon got involved with site work, producing most of the Lord Rahl-style badges for the Medieval skin, along with many other site awards which are still in use today. This lead to him being approached by Belisarius to join the Content Branch in the art department with newbie Caradog (now Deseprado). Together, Guy and Caradog created both the Content Artists and The Graphics Workshop, where they both became Local Moderators. He received the Scribe's Quill for his work over his towards the Content Staff in the time he served.

Later he joined the Wiki Staff for a short amount of time. He resigned in early 2009 after assisting in the Medieval II: Total War release and helped contribute to the growth of the Wiki. He received the Wiki Staff Award for his contributions to the TWC Wiki.

After discussions, Guy was put forward to become a Junior Moderator. He passed in early 2009. He served only 3 months and received the Bronze Moderator's Mace for his work.

However, he resigned from all of his positions, except Citizen, due to personal reasons. Today Guy continues to seldom visit the forums. 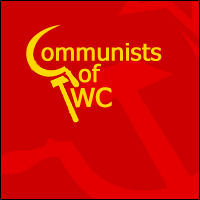 In early July 2010, he created the group "Communists of TWC" which was a far-left political group. It reached a peak of 84 members.

The group had its own article published by Guy named "The TWC Star" although publishing finished in mid-2010.

YOU can help us improve this Wiki! ~ Look for ways to help and editing advice. ~ If you need further advice, please post here.
Retrieved from "https://wiki.twcenter.net/index.php?title=Guy&oldid=79315"
Categories: