A hand mortar can be used to place a grenade on a target beyond normal throwing range.

Despite its name, the hand mortar is more of a grenade launcher,with a wide barrel,typically of bronze, mounted on a musket stock so it can be fired from the shoulder. This method of delivery offers increased range, but the weapons are temperamental and prone to misfires or bursting. this, Coupled with the variable quality of the grenades fired, means that in the wrong hands a hand mortar can often be as much of a danger to the man firing it as to the enemy. Despite this, the grenade is a useful battlefield weapon when used against enemies deployed in cover, or for clearing choke points.

Historically, the armies of the Ottoman Empire and Russia employed the hand mortar. In the Russian military, hand mortar detachments typically operated in of the artillery, because the unpredictability of the weapon made it unpopular with among the line regiments! The Ottomans always treated grenades as a form of "thrown artillery". 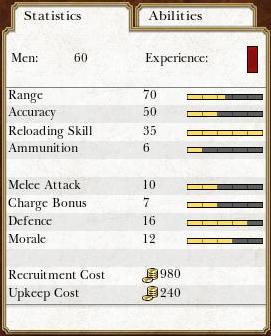 If you place your Hand Mortars behind your Line Infantry they can fire over their heads and tip the balance of a firefight in your favor.