What is a hotseat?

A hotseat, or hotseating, is in principle a mode of gaming where several players play on the same computer, "hot"swapping the controls among them. However, it has quickly evolved into something that can be done online as well, where people upload their save games and pass the turn on. This is the only way to play multiplayer campaigns for Medieval 2 and through some tweak and variance also Rome 1. However, hotseating is primarily attributed to Medieval 2. One person will play their turn, end it, save the game on the next factions turn and then send the file to the appropriate player. This goes on and on until victory is achieved.

Mechanics of a hotseat

Due to the limitations of the game, a hotseat campaign is played quite differently from a normal, single-player campaign. In a hotseat the factions take turn on being controlled by a player, which means that all the factions that are not not on their turn will be controlled by the AI. This means that all interaction a player does to another faction on their turn will be carried over, but the AI will respond in the Opponents players stead. This especially comes to light when fighting battles. As an example, if an English and a French player are at war, and on Englands turn he attacks a French army and chooses to fight it on the battle map, the French army will be controlled by the AI. Therefore the attacker always has the advantage in a hotseat, and why in most hotseats hosted on TWC the rules only allow manual battles against rebels. However, the attacker still has a significant advantage in the ability to reload saves to get a satisfactory result.

When you start a turn in a hotseat you'll be met by a screen with information on the game and requesting a password required to "unlock" the save. This is crucial to prevent other players from snooping on you. In addition, due to the nature of a game the notifications scrolls don't appear when loading a save game, and thus notifications of buildings constructed, units trained, new traits and events will not appear, but must be manually checked. 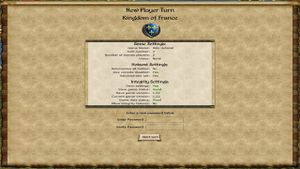 The start screen of a hotseat, which is shown every time a save file is loaded.

To prevent cheating the command console is usually disabled from player use, requiring an administrator password to access. With the console enabled one can do a multitude of commands with many listed here. These commands include resetting a players password, turning a faction playable or AI mid-game or adding or removing money from a player. In adition, diplomacy is done a bit differently from single-player. Diplomacy can be done in two ways: The first in which the player sends a diplomat like in single-player. However, the player will not receive an immediate response, but the approached players will instead be met with the offer screen prompted on their turn. The second option is sending a message directly to the player, which contains text. This is done by selecting the faction symbol on the diplomatic screen.

A players usually goes through three steps when playing a hotseat turn. 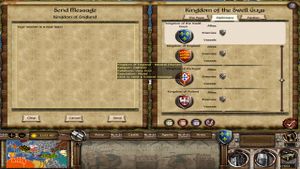 Setting up a hotseat

While most mods come with the hotseat function included as it came as part of the kingdoms expansion, one should still tweak it before one goes into proper play. To participate in a hotseat no file editing is required, but if you're to start one yourself some editing is adviced. Here therefore is a template for what your settings should end up looking like. The explanation on what the code does is written following the ##. Do note that this is only neccessary if you're to start and administrate the hotseat yourself.

Hotseating has a very strong prescense on Total War Center, where several games across several mods are run simultaneously, with Gaming Staff dedicated to keeping things in order. When playing in a hotseat such as on TWC there are several rules in place to ensure fair play, as the AI is quite easy to exploit and abuse. Legend of Total Wars exploit guidecovers only a fraction of the possible exploits, and they are usually banned. The easiest form of cheating would of course be through the developer console, but that it is always locked for players in competitive environments behind an admin password. A typical ruleset can be found in this hotseat.

One important aspect of competitive play is that it's usually all in good fun and friendly. While one does control nations, there should always be a civil and friendly manner, and competing in hotseats is a good way of making friends, should you not let the fighting get over your head. However, there are often tournaments and competitions awarding special prices, which can be tournaments awarding steam gift cards hosted by Youtubers, on discord servers or for special medals on TWC, as indicated by being Official Gaming Staff competitions. These can include Newblood hotseats aimed at newer players or 1v1 Tournaments. However, most hotseats are done with the sole aim of fun, and the commonly used rules help ensure fairness for all, and dedicated admins facilitate a more enjoyable experience for the players.

Playing in a hotseat mode on single-player also has its merits, especially when it comes to testing. The ability to quickly cycle through all factions and turn them AI and see how they develop can be used both for balancing factions and top create a different scenario altogether.

YOU can help us improve this Wiki! ~ Look for ways to help and editing advice. ~ If you need further advice, please post here.
Retrieved from "https://wiki.twcenter.net/index.php?title=Hotseat&oldid=81961"
Categories: