INVASIO BARBARORVM, also known as Invasio Barbarorum:Flagellum Dei (IBFD) is a comprehensive modification for BI with a series of campaigns focusing on the late Roman Empire. Sub mods include Rio's IBFD and Imperium Julianorum. The aim of the modification is a balance between enhanced gameplay and historical accuracy. Set in 410AD, the year of the Sack of Rome by Alaric's Visigoths, the modification features a complete rebuild of BI. 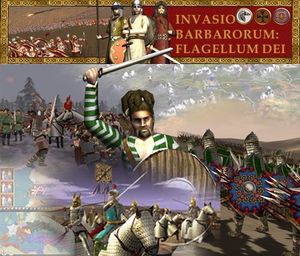 INVASIO BARBARORUM v7 (contained in mod-folder) and the 7.03 patch have been released. For more information visit their subforum or download the mod here

The mod was started by Atilla Reloaded under the name of "Atilla's Real Late Roman Army Mod", because at that time it was just a pack of more realistic new models and skins for late romans only. These models were originally created for the now defunct Imperia Romana (whose members are now working on the M2TW mod The Gathering Storm). The 3rd version of this pack could be perceived somewhat as the real start of the mod: the pack had his first fans, and not only Romans but even Sassanids had their new models. Soon the Franks, Saxons and Celts were redone. Some little graphic work started with the insertion of new faction symbols.

Atilla Reloaded was then the only modder, as it also clear by the name of the pack. In search of some coder to add a building to recruiting Foederati units, to insert in his 4th version, Mylae offered to help; other players also started to give lots of suggestions and asked for historical accuracy.

Suggestions from Mylae about starting the mod in 410 were accepted, and the forthcoming version had several new changes: almost all facions had new units, and the modpack 4.0 get the name of Invasio Barbarorum - Flagellum Dei 4. A 4.1 version soon appeared to fix some bugs. It was clear that at this point what was needed was just a continuous work to make the mod better. This version however had still Sarmatians and Roxolani, and started in 363 CE, because took time to implement the numerous suggestions from several players. The map featured more than twenty new provinces, the riot risk was increased - and it was a motive of pain for Romans players. There were over 30 units of Romans, with a more heavy eastern roman cavalry, a full remake of Romano-British, Sassanids with large flags, Franks, Saxons and the conversion of the Celts to Picts. The West Roman Rebels were substituted by the armies of Constantine III (but under the unhistorical name of Imperia Gallorum, the name was used for an earlier usurper Empire established in Gaul). There was even new loading screens.

Riothamus started to transfer the IBFD units to the BI WarMap II V0.4, and to set as starting year the 450 CE. This was the start of the Rio's IBFD submod. In fact, the new versions increased rather than satisfied the demands of the players. There was a 4.0.3, with his 4.0.4 patch, followed by a 4.1 and his 4.1.1 fixes, all in .exe files, tweaked by GershomPathmos.

After some time, it was generally agreed to use a new, larger map to give Sassanids more space in the east, and for this purpose Sounds Like Killing released a short-lived transposition to WARMAP v1 (made from IceTorques). A little building addon made by Mylae appeared and inserted few new buildings and some unique one across the world, and a 4-turns-per-year script was inserted. Ramon Gonzales y Garcia released a "Constantine the Usurper v0.1" that inserted the Vandal hordes in Spain (before they were placed around the Rhine).

A curiosity: the mod was known for a certain time as IB-FG. It was either a simple typing error made by Atilla Reloaded, or he may have substituted the English equivalent of 'God' for the latin 'Dei'. All of Atilla Reloaded's IBFD had this name, but strangely none noticed it until a few months later. A poll was made to decide wheter to use IBFG (that had become familiar to many) or IBFD. With 14 to 1 the latter was decided.

IBFD 5.0 was the first version made without Atilla Reloaded, since he decided to leave the team. This was not caused by problems of any sort but because, as Atilla himself pointed out, he was tired of modding. As he posted, "Thank you! And everyone who worked on my mod after I took a break from modding. I am charmed by your work"

It was a major release that included Archer's SkyMod, and a new leader and skinner/modeller, Ramon Gonzales y Garcia who took the place of AR. This version featured remodelled units for all factions (though, as RGyG was claiming at the time, visual compatibility with AR's skins and speed of release were foremost over Historical accuracy - despite this, the skins in IBFD v5 were used in the BI version of DarthMod and in Goth's all factions mod). This version also featured several new buildings, starting position in 407, with still (historically inaccurate) Sarmatians and Roxolani; the Romano-British were led by Constantine III - a historical fact in that in 407AD he was leading the troop insurrection in Britain - Vandals were a horde in Spain, near Tarraco, Berbers still were given (unhistorically) the city of Tingi, Ostrogoth occupied Dacian lands.

It was also an Arthurian mod of sorts since the Romano-British faction was designed on one of the beliefs of the lineage of Arthur (starts as a boy in this version), being a grandson of Constantine III, and a nephew of Ambrosius Aurelianus (playable character in this version).

The internal versions of IBFD v6 was a perennial beta due to the numerous changes it included. It could be considered a pre-build of the actual version, and many of his version never seen the light of open sharing, but were used for testing ground for further improvements by a flexible team. The 6.1 get some fixes from Ramon Gonzales y Garcia; 6.2 eliminated several bugs; 6.3 fixed models and textures; 6.4 add the new map made by the Celt - the actual one - stretching up to Indus valley; 6.5 included new UI elements for interface; 6.6 made all factions playable without hording and shadowing; 6.7 enabled West Roman Rebels as Imperium Constantini; 6.8 added banners and new stratmap models; 6.9 get Slavs as a spawning horde; 6.10 tried to fix some bug; 6.10.2 ger new radar map and fixed some issues, 6.10.3 listed a "I am not sure here" in the fixes log - as you can see, it was a long and difficult process. 6.10.4 cleared several processes due to bugs and reverted baco to 10.1; 6.11 get new models and textures, new factional maps and leader pics in selection menu; 6.12 add new models and skins, plus some minor fixes and tweaks. The 6.12 managed also to become 6.12b, 6.12c and a final 6.12d. The mod get, in this time, scripts that aim to create relevant family trees, reproduce the Sack of Rome, Judaism as a new religion, new animations from Europa Barbarorum and SigniferOne, and other important things.

In this period, the team was variously composed, with Ramon Gonzales y Garcia, Mylae, the Celt, and Hans Kloss. Also juve, darkrider, Galloper, K-PAX, Koles, Onire, Goth, and many other people. The mod also get the permission of using some work of other mods, like textures and models from Arthurian Total War, Anyan's Realistic Landscape Mod, Arbaces' Age of Darkness, Archer's SkyMod, texture elements from Rome Total Realism, DarthMod formations, Goth's Goth's All Faction Mod, officers and a draco model from Lusted's Late Romans v2.0, horses from Pinarius, 4tpy script from Myrddraal.

After a brief period of no releases, (members of the team were once again working on internal versions), a 7th version was released, under the name of IB VII. The "Flagellum Dei" was officially removed due to the connection with Attila the Hun (known as the Scourge of God, in latin, Flagellum Dei), who is present at the game start only as a baby, since the starting year is 410 AD (historically he should be born a few years later). IB VII also used the -mod: switch command, to allow a multiple mod install. This version - the current one, with a 7.03 patch - features an intense gameplay campaign, optional scripts for the Sack of Rome and to move Visigoth first south of Rome, then to southern France to settle there; script for Sassanid Partisans (a partisan army will appear if Ctesiphon is menaced), a Limes script that features a series of fixed roman garrisons along the Limes, scripts for reinforcements and force diplomatic stances. The East Roman Rebels has been reverted as Lakhmid Arabs, regions have been added to the map as per juve's suggestions, Slavs tweaked as per DukeOfSerbia's suggestions, Razor's Romans have been implemented adding a new and polite look to Late Romans, added new traits and ancillaries, inserted "numidian" names for the Amazigh Berbers, Prometheus's grass and other changes. To solve bugs and add fixes, the game soon patched to 7.01 and 7.02, with a final 7.03 now available. It adds several things and made the game more stable, solving several bugs, and adding Stonehenge as a "Wonder".

At the moment, an 8.0 is under development.

Invasio Barbarorum is set in 410AD, the year of the Sack of Rome, at the time of the great migrations, in the Late Roman Empire, at the start of the Dark Ages.

The modification has the following factions:

The map is based mostly on the Celt's BIlarge map, which is itself based on Lionskin's work. It has been intensively modified by RGyG, Mylae, and Goth, and incorporates work by Arbaces. Parts or modified forms of it has been used in Goth's Imperium Julianorum (the original version) and the dark fantasy mod End of Days.

Recruiting your units in IBFD depends on your culture.

siege engineers are simply that, buildings to build siege engines, archers are trained in standard barracks or called up from the population.

Smithies are also necessary to train heavily armored units. Since the building requirement to train units is bugged in 1.6, this has been decided to be the best solution. For the cultures that do not recruit from barracks/stables, these builings give morale and experience bonuses, and are still worth building.

Below is a typical Roman building tree.

IBFD has an options system that allows you to make alterations to the way the mod plays to suit your own preferences. Features that can be changed in the options system include:

The game (7.03 ver) still has several unhistorical features, that are mantained for enjoying the gameplay. Probably most of them will be eliminated in the future version. They consists of:

YOU can help us improve this Wiki! ~ Look for ways to help and editing advice. ~ If you need further advice, please post here.
Retrieved from "https://wiki.twcenter.net/index.php?title=Invasio_Barbarorum:_Flagellum_Dei&oldid=84164"
Categories: