Lithuania are a playable faction in the Teutonic Campaign in the Kingdoms expansion for Medieval II: Total War.

The Lithuanians start with much land, however they start out hostile to the Teutonic order in an exposed position. 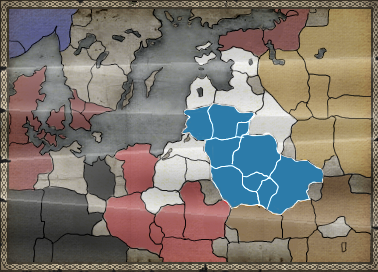 (When an attempt to assasinate them is made)

Blessed by the gods + 1 voilence

Protected by the gods +1 Piety +1 voilence

Chosen by the gods +2 Piety +2 violence

You will be asked to convert at turn 37 if you have under 5 regions and turn 67 definitively ( Can anyone confirm the turn??) . Converting will grant you armored special units, but remove you special units made from the old gods temples. It will remove your old priests and it will convert you cities to 75% cathoclicism

-You do not have to worry about catholic priests anymore.

-Your castles give you access to more and stronger units.

-You will be following what historically happened.

-Your nobles will not receive as many pagan magicians.(Fear this ancillary!)

-Losing an easy to build shrines powers , which are often quite powerful

-Losing priets and soldiers from shrines and the shrines. Meaning you just wasted a lot of money

-You will probably be attacked by everyone else anyway .

Lithuania have access to some good skirmishing troops such as javelinmen and mounted javelins. These are important units to use when fighting against the heavy units of some of the neighbouring factions such as those of the Teutonic Order. The Lithuanians also have skillful archers and mounted archers- another factor in defeating the strong Knights of the Teutonic Order. Although Lithuania have powerful and zealous light infantry and cavalry, most of their units tend to be lacking in defence, so the Lithuanians must rely on good ambushing tactics to be victorious. Many of their units have armour-piercing weapons (such as polearms, axes and battle scythes), and in a shock charge, these weapons can really hurt a heavy line of infantry.

You must quickly capture some of the nearby rebel villages in order to secure more land from the Mongols and Novgorod before they take them. Meanwhile you should drive some units towards some of the nearby Teutonic order settlements. Use a combination of ambushing and skirmishing tactics in battles and rely on the powerful offensive charges of the Lithuanian units in order to break enemy lines. Although you have some very heavy infantry, they're no match for the disiplined soldiers the Teutonic Order uses, so you should avoid close-combat as long as possible, until you have your shrines to upgraded to the maximum. Before you have finished your shrines, you should use hit and run tactics: attack an enemy with a few horse archers and run away when you run out of ammo.

If you see that your losing the war against the Teutonics, capture Riga so you can build the Hanseatic HQ at a city which will provide you with MORE florins to fuel your war!

Links to AAR's and Guides

YOU can help us improve this Wiki! ~ Look for Ways to Help and Things to Do. ~ If you need further advice, please post here.
Retrieved from "https://wiki.twcenter.net/index.php?title=Lithuania_(M2TW:K_Faction)&oldid=79585"
Category: