Macedon (Μακεδονία) are one of the factions in Rome: Total War designed to be non-playable. However they can be made playable by simple modifications to the game files (more information on which can be found here). This faction has a pre-made description.

The symbol for Macedon in RTW is the Greek letter Lambda, which is not usually associated with Macedonia, but rather Sparta, the lambda being the first letter in "Lakedaimon," the name for the area around Sparta in Greek. 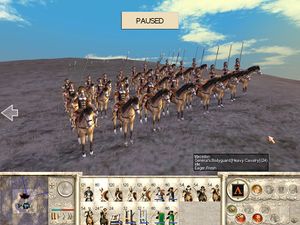 Macedon is an faction that has two focuses, Pikemen and Horsemen. Their Infantry is all Phalanx based. It all follows a steady progression of quality increase, ending with Royal Pikemen, a solid infantry backbone unit that is tough enough to absorb most missiles. Their Phalanx units are used to crush all lighter troops from the front foolish enough to charge and to hold off heavier infantry long enough for the cavalry to charge their rear. Macedon as a number of good choices for this role. Their cavalry is all essentially charging cavalry, light and heavy. Macedon gets good siege weapons, and average recruitable archers, along with powerful Mercenary Cretan Archers.

Royal Pikemen This unit is more like a hoplite unit equipped with long spears than a true pikemen unit. They are the fourth best spear unit in the game.

Companion Cavalry These cavalry men have a powerful charge,as well as melee capability.

Macedonian Cavalry A nimble unit which is easy to train and quite effective.

Light Lancers A fast unit with a incredible charge.

YOU can help us improve this Wiki! ~ Look for Ways to Help and Things to Do. ~ If you need further advice, please post here.
Retrieved from "https://wiki.twcenter.net/index.php?title=Macedon_(RTW_Faction)&oldid=83052"
Category: