Difference between revisions of "Major Darling"

Major Darling joined the forum on May 27, 2009 and soon took interest in RPGs like the God Save the King and Vive L'Empire (which explains his ridiculous post count and the 36+ posts per day, which was actually 60 PPD before). He's a writer for the Eagle Standard (having took part in seven issues of it), the Helios (five) and during his time in the Scriptorium, contributed nine articles. He has also worked with the Podcast staff and has been with the wiki staff for a year. On February 28, 2010 he was patronised by Belisarius and passed on March 11th. After being patronised, Major Darling suddenly felt a change in his body. As if he was experiencing a second puberty, this time it didn't change him into a rebellious, zitfaced little brat. This time, it changed him into a force that feels so awesome it makes women orgasm when he walks past them. He's always helpfull and people usually beg him for help because he makes everything come true. Major Darling has become a demigod when he was patronized. Not alot of people get to that stage of citizenship. Being the very eager member he is, in a few year he'll probably have a post count too absurd to comprehend and will probably beat Ferrets54, Tom Paine and Яome kb8 combined. Considering this sentence is a year old I'm sure the next slave who is forced to write this article will write that he has the most post/rep of all the people of TWC.

He is currently the mentor to many, including the citizen, Lysimachus and the ever resilient keeper of the Silver, Nole6494. He is also a local moderator in several areas including the mod of the popular RPG God Save the King and all of the TWC Community RPGs (And all Subfora within). He is an active member of the Silver Auxillia and was the Wiki slave driver for a few months until Mr MM took over the job early September 2010.

He patronized Capt. Fozdike, ♔Marshal Beale♔. He also forced Capt. Fozdike to do this Wiki Page against his will, and then he forced Ascarona to update his page a few months later... 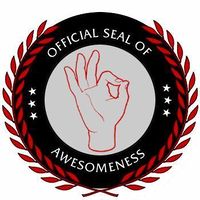 The most serene seal of awesomeness, only granted to those who live by the way of awesome in everything they do.