Milan is an Italian faction that begins with the cities Milan and Genoa under its control. These homelands are surrounded by mountains to the north and west and the Mediterranean sea to the south, making it relatively secure from surprise attacks from the more powerful Holy Roman Empire to the north or France to the west. 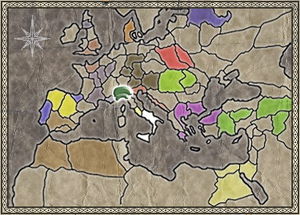 Milan, start East of Marseille and West of Venice. Milan has a very rich starting position, the lands of Milan are very fertile and the Genoese port will hep boost Milan's income. A wise Doge may try to ally himself with the pope for Papal support. Milan also has a bitter past with France, Venice, and The Holy Roman Empire. Annexing Bologna in the early turns can prove to be a wise move. But you do have some options, rushing to take Florence before the Pope takes it is vital, it will boost your economy and give you better footing in Italy. The settlement of Ajaccio can also prove very useful but be warned, it is a target for French Blockades and Sicilian and Spanish land invasions. When those places are secured you may wish to build your forces to take the stronghold of Bern to the north. Be mindful of how you go about this, if you leave your capital unguarded the Venetian dogs will surely try to besiege your beloved city my Doge. You may also find the Holy Roman Empire trying to take Bern from you withing a half dosen turns after its capture, but it is of little matter, you can easily repel the inferior early forces of The Holy Roman Empire. The Nobles may urge you to take Dijon next but spreading your forces thin is ill advised. Take your time my Doge and the world will be yours!

Whilst the Italian States in general are not known for their strong cavalry you may find that between them Milan has the best cavalry that can be recruited within city walls, the Familiga Ducale! While not a match for the Highly Trained knights of the western neighbor France they can still give a very good account for themselves. You can also recruit Cavalry Militia which is better than the other non-italian faction's Merchant Cavalry. Like all of the Italian States the Milanese boast the best spear militias, able to go toe to toe with armored seargants and are better equipped than Byzantine Spearmen. Another added bonus to the militia mix is that Milan boasts excellent crossbowmen, with some of the most powerful crossbows in the game. You can easily rain death on your enemies and take out massive numbers of enemies before charging home for a victory. The best infantry unit available for milan are actually recruited in cities and neither Venice nor Sicily have access to this great unit. The unit I speak of is the amazing Dismounted Broken Lancers, and with plated armoring they are a sight to behold and almost on par with the dismounted knights of France and England. To add a final topping to the mix of milita you can also recruit pike militia. While not the best unit, they do have their uses and can be used to counter lesser cavalry or at the very least hold them off for a short while. If you are concerned about the Late period gunpowder units then you have nothing to fear with Milan. While they do not get the Serpentines they do get some other great gunpowder units, and are one of the only factions to have Musketeers which have a much better range then the lesser Arquebusiers. The Monster Ribault will strike terror and fear into the enemy ranks and culverine is more than sufficient to take down any wall in your way. The best strategy for Milan is to make up in numbers what it might lack in professional soldiers, and this is easily remidied. As you can see the best, well rounded Milanese forces come from cities, most have low upkeeps, and the Italian States are very rich. A wise Doge might decide to convert any conquered castles to cities to make a great and unmatched fortune in Europe and one day make the Duchy a powerful and fearsome sight for all of Europe to aspire to, if not envy and cast down the hated Rivals of France, Venice, and The Holy Roman Empire! 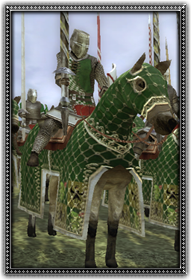 YOU can help us improve this Wiki! ~ Look for Ways to Help and Things to Do. ~ If you need further advice, please post here.
Retrieved from "https://wiki.twcenter.net/index.php?title=Milan_(M2TW_Faction)&oldid=59918"
Category: