Over two hundred years have passed since the Viking Age of Britain portrayed in Viking Invasion II, and the Dark Ages are coming to an end. Norman Invasion starts in the year AD 1066. William, Duke of Normandy, has landed his troops at Pevensey bay and King Harold II of England has just arrived at Hastings, fresh from victory at Stamford Bridge, to hurl the Normans back into the English Channel.

As the player you can choose to take up the Fighting Man banner of Harold and defend your shores against the Norman dogs, or you can – if you really feel the need! – take up the Papal Banner of William “le Batard” and put the English firmly under the Norman yoke. You can also play as one of the three minor factions - the Welsh, Norse or Scots.

For those who have played Viking Invasion II, you will see that Ireland no longer features in Norman Invasion as that land was not invaded until after the period covered in this modification. Western Scandinavia has also disappeared from the map (it was no longer of significance to England’s immediate history after Harold’s victory against Harald Hardrada), but the Continent has been added and includes Normandy, Flanders and the Cotentin Peninsula. The map has also been significantly enlarged and the number of counties increased.

Historically, of course, William’s invasion of England was successful, though not without setbacks and rebellions. The English people were brought under a dreadful feudal burden in their own homeland, though some escaped to other lands such as Scotland, Scandinavia and places even further abroad. Even Wales and Scotland eventually succumbed to the Norman’s military machine.

But it doesn’t have to work out that way…In Norman Invasion “history” is now in your hands! 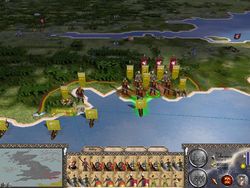 Conceived, created, researched, mapped, built, written and managed by MasterOfNone with support in the following areas from the following people:

With elements kindly offered by:

The core team behind Viking Invasion II was toying with the idea of a submod or continuation of it since Dominion of Britannia (VI2's official submod) was released, and in early June 2009 MasterOfNone conceived the idea of a mod based around the Norman Invasion. The mod was based heavily on the VI2 resources, so five months from the moment of conception NI was released (one day before the battle of Hastings anniversary, Oct 13th). There have been 4 patches for it since, the last one significantly altering campaign balance to make the campaign proceed at a faster pace. No more patches are planned.

YOU can help us improve this Wiki! ~ Look for ways to help and editing advice. ~ If you need further advice, please post here.
Retrieved from "https://wiki.twcenter.net/index.php?title=Norman_Invasion&oldid=84174"
Category: