Numidia are one of the factions in Rome: Total War designed to be non-playable. However they can be made playable by simple modifications to the game files (more information on which can be found here). 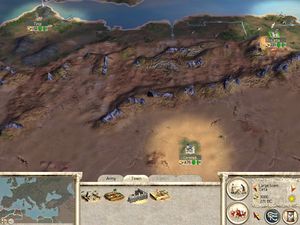 Numidia start in north-west Africa bordered by Carthage, with a city in Libya. 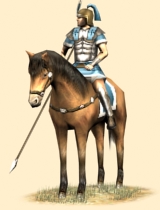 Numidia is an interesting faction with strong light troops and good light cavalry. They are strong in the early game. They get an excellent early skirmisher cavalry unit and along with medium cavalry support, however they have no late game heavy cavalry except for Generals Bodyguard. They get missile troops like Javelinmen and Archers before other factions, giving them an advantage with range. Their infantry is interesting, they get a good Spear unit and an imitation Legionary unit that is about as good as Principes. It is not the best infantry selection but it is decent enough. Numidia is sort of like barbarian factions in that their early roster is good but late game they will have trouble against the Romans.

Numidian Javelinmen: Can be recruited from Barracks.

Desert Infantry: Can be recruited from Militia Barracks.

Numidian Legionaries: Can be recruited from Army Barracks.

Numidian Cavalry: Can be recruited from Stables.

Numidian Camel Riders: Can be recruited from Cavalry Stables.

YOU can help us improve this Wiki! ~ Look for Ways to Help and Things to Do. ~ If you need further advice, please post here.
Retrieved from "https://wiki.twcenter.net/index.php?title=Numidia_(RTW_Faction)&oldid=83227"
Category: