Poland is a catholic faction, located in central Europe, north of Hungary. First, it's fairly secure, with only the mountainous Hungarian border at the campaign's outset. Second, the vast and empty steppes are to Poland's east, and may also provide the faction with a good source of Papal favor points, as only a small percentage of people in these lands begin as Catholics. 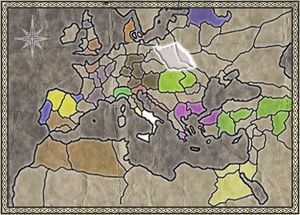 Where Poland start their campaign.

They start North of Budapest (Hungary) and South of Thorn, surrounded by Rebel settlements. 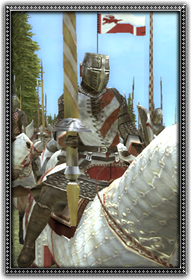 Poland is a heavily cavalry focused faction. They have an enormous variety of cavalry options, probably the most versatile in the game. From a motte-and-bailey they have access to Strzelcy, a powerful mounted Crossbow unit who can also fight in melee. They are better than Horse Archers against Armoured foes and are essential for Poland; they should be the backbone of the army. They also get Polish Nobles from a Wooden Castle, the best javelin cavalry in the whole game and a very respectable melee fighter. They have a number of later game lancer choices, some of whom are faster, others are heavier; all of them are good. Their Hussars can be trained in both castles and cities, making them extremely useful. Poland has few infantry choices, however, and will have difficulty fielding a lot of them unlike other Europeans; their foot missiles are mediocre as well. They don't have good units from cities either besides Hussars and the typical Catholic Crusader Orders. A Polish army might do well to be entirely on Horseback and will probably want Infantry Mercenaries to help for sieges.

YOU can help us improve this Wiki! ~ Look for Ways to Help and Things to Do. ~ If you need further advice, please post here.
Retrieved from "https://wiki.twcenter.net/index.php?title=Poland_(M2TW_Faction)&oldid=83126"
Category: