Pontus is one of the factions in Rome: Total War designed to be non-playable. However they can be made playable by simple modifications to the game files (more information on which can be found here). Aside from Macedon, Pontus is the only non-playable faction to have a pre-made description. 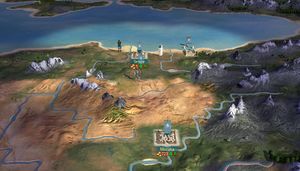 Pontus starts in north and east Asia Minor, north of the Seleucid Empire, and west of Armenia. 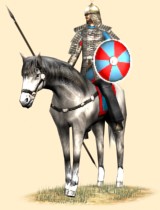 Pontus, like the Selucid Empire, is a very versatile faction, with a heavy cavalry focus but competent pikemen as well. They are a well rounded faction with few weaknesses; although their infantry is not the best but it is still very useful later on. They get access to some very strong cavalry choices that are armed with Javelins and competent in melee, along with a unit similar to Cataphracts. They have a very good selection of Chariots, both Chariot Archers and Scythed Chariots that are around as good as those of Egypt. Their early infantry is the typical Eastern trash infantry, but they get some quite good Pike units later in the game that are similar to the Selucids. Their missile troops and siege weapons are average. Overall Pontus has quite a good roster, with useful troops at all points in the game.

Bronze Shield Pikemen: Bronze shields are the elite of the army of Pontus, among the heirs of the world-conquering phalanxes of Alexander!

Pontic Heavy Cavalry: Pontic heavy cavalry are javelin-armed horsemen who can also fight hand-to-hand - a potent combination in one force!

YOU can help us improve this Wiki! ~ Look for ways to help and editing advice. ~ If you need further advice, please post here.
Retrieved from "https://wiki.twcenter.net/index.php?title=Pontus_(RTW_Faction)&oldid=84251"
Category: