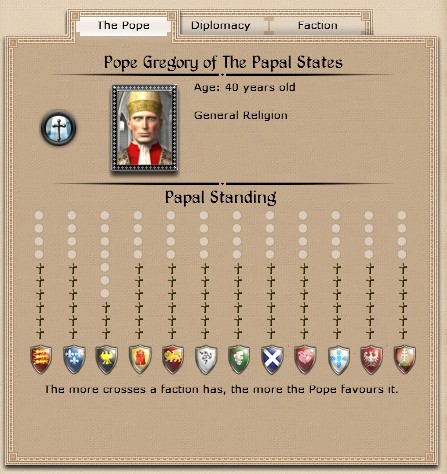 A faction's level of popularity with the pope is shown by the number of crosses it has in the Papal Standing screen (see picture).

This level of popularity or standing will decrease if a faction disobeys or fails missions, if it declares war and remains at war with other Catholic factions, or if its regions have too high a level of heresy.

Occasionally, the Pope will order a faction to do something. These missions usually have something to do with religion, and include: assassinating heretics, recruiting priests, building churches, joining crusades, cancelling alliances with excommunicated or Muslim factions, ceasing war with Catholic factions, etc.

The Pope will think more highly of you if you complete these missions and will occasionally send you money. Should you refuse the Pope, or openly violate his wishes, you face a severe decrease in papal opinion, if not excommunication. The Pope also has a bad tendency to start Inquisitions if he is dipleased with you, sending inquisitors whose goal seems to be to burn as many of your generals and agents as possible, including your priests, and especially cardinals.

On the death of the Pope, natural or otherwise, a papal election will be held on the next turn. Any faction with at least one cardinal can participate, and faction leaders can order their cardinals to vote for one of the Preferati, the three cardinals in the game with the highest piety. Leaders can also have their cardinals enter diplomacy with the other cardinals present. Factions can be bribed into having their cardinals vote for the candidate of the briber's choice. The Preferati with the most votes, or the one with the higher piety in the case of a tie, wins the election and becomes the new Pope. The new Pope will think more highly of factions who voted for him, and will be displeased with those who voted against him.

Inquisitors are rather troublesome little campaign map characters who are sent by the Pope to 'deal with Heresy' in your region. Beware that 'dealing with Heresy' can involve assassinating some of your best generals!

YOU can help us improve this Wiki! ~ Look for Ways to Help and Things to Do. ~ If you need further advice, please post here.
Retrieved from "https://wiki.twcenter.net/index.php?title=Pope_(M2TW)&oldid=64945"
Categories: