Punjab is an emergent nation in India, which has Sikhism as its State Religion. Punjab can not build religious buildings without a mod. They start with one region, Punjab, the capital of which is Lahore. Punjab has many expansion opportunities; it can use the Mughal-Maratha conflict to its advantage, and take on either of them, or fight both for control of India. Th Punjabi armies can also march into Afghanistan and Persia, and then, onward to Georgia, Russia or Egypt.

Punjab is one of only two nations that have access to the formidable and powerful Sikh infantry. As Sikh infantry can only be trained in Punjab, this faction holds a unique advantage over its rivals in this regard, unless it loses its home region.

If you have HusserlTw's excellent Empire: Total Factions mod installed, which you can find at TWcenter.net, you can play as Punjab and your campaign will begin in the year 1783. Your only starting region is Punjab. You will have no starting general, but will have a small garrison in Lahore. The Punjabi faction leader, Charat I, is a less than awe-inspiring leader, only causing his nation to lose 20 prestige a turn. 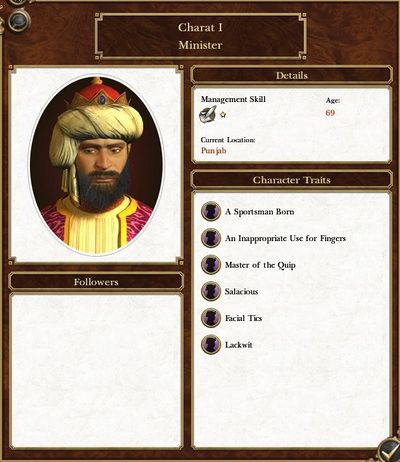 Punjab is quite rich in natural resources, having a rice and wheat farm and a gold mine. Also, there is a weavers' cottage and an iron workshop. A tavern is also present. Punjab's position means that it can trade with the Mughals, Marathas and Afghanistan over land, but as they have no ports, sea trade with Europeans is impossible until a territory with a shoreline is captured.

Punjab is quite advanced, and starts with many technologies researched. There is a school at Rawalpindi, but you don't have any starting scholars.

Apart from a small garrison in Lahore, you have no armies, and only one general. The Punjabi roster is exactly the same as that of the Marathas.

Trade relations need to be established with the Mughals and the Marathas. The small amount of troops in Lahore will serve your purpose for the first turn, but more sould be recruited. There is no point in recruiting any other line infantry except Sikh musketeers or Bargir Infantry, as the other types are too indisciplined. On the first turn, use a few units to annex nearby Kashmir. Sindh is an important target, as it will allow you to get a trade port, and begin exporting your trade goods. After you have taken Afgahnistan's valuable territories, you are ready to take on the Marathas and/or the Mughals. Expanding into Persia is also a good option, and will allow you access to Eastern Europe, leading to trade/war with Russia. But you should make sure you are a force to reckon with in India, or the Marathas might just push you out. India is very rich in tea and cotton, so it is profitable and pragmatic to keep increasing your holdings there. Also of note is that you are the sole Sikh nation in Empire: Total War, and your inability to construct religious buildings means that nearly every territory you conquer will have some form of unrest or discontentment.

YOU can help us improve this Wiki! ~ Look for ways to help and editing advice. ~ If you need further advice, please post here.
Retrieved from "https://wiki.twcenter.net/index.php?title=Punjab_(ETW_Faction)&oldid=82791"
Category: