From TWC Wiki
(Redirected from RTR)
Jump to navigationJump to search

Rome: Total Realism VII or (RTR VII) is a complete modification for the computer game Rome: Total War intended to correct and enhance the historical accuracy of the original game. RTR VII is also intended to add a heightened sense of enjoyment. RTR VII serves as the name for a new line of RTR mods which stands independently from the previous Rome Total Realism 6 series. The RTR VII series currently has two releases, in the form of Rome Total Realism VII: The Iberian Conflict (or RTR VII: TIC) (2008) and Rome Total Realism VII: Fate of Empires (RTR VII: FOE) (2009). RTR VII has had enormous success and received five awards during the Total War Center 2009 modding awards for FoE. The final mod planned for release in the RTR VII series has been named RTR VII (without a sub title)

What differentiates RTR VII: TIC from other mods in the RTR series is that it is a comparatively short campaign that could be completed in a relatively short amount of time. The mod is based around the story of Hamilcar Barca`s conquest of Iberia, and as such the player is able to relive these experiences, while still experiences the "free roam" concept which dominates the Total War gaming series.

RTR VII: FOE begins with the Pyrrhic invasion of Italy in 280 BCE. The map was extended to cover all the area between Iberia and Epeiros in the Mediterranean. As the campaign progresses, it eventually leads to the inevitable Punic wars. Playable factions include: The Republic of Rome, The Republic of Carthage, The Cisalpine Gauls, Celtiberians, Kingdom of Massyli and The Kingdom of Epeiros.

FOE is different from TIC in the sense that it is not story-driven, nor is it as heavily scripted. As such the campaign has been extended, FOE is much longer than its predecessor. However, the depth of FOE is extended by the addition of "minor regions" which represent the numerous small settlements that were widely neglected in the original game, and an overhaul of the RTW economic system. These settlements do not grow and provide no recruitment or building options, however they account for approximately half of the player's income. These mini regions add an original depth to the game, and as such received generally positive reviews.

RTR VII has been noted as the last in the RTR VII mod series. As such, the sub title which has accompanies previous modifications (TIC and FOE respectively) has been dropped.

The mod is still in development but has been released to the public. The RTR VII mod team has currently released five previews which reveal a considerable amount of detail concerning the mod. These details include: The extension of the map from Iberia to Asia minor (including Gaul, the Balkans, lower Scythia, and lower Germany), several new factions, the return of mini regions, new walls, new user interface, and a plethera of other things. The current status of the mod is at Patch 2a and more new features are being implemented. To get the latest updates and details head over to the RTR forums. 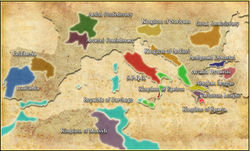 The team is always looking for new minds. Check out the mod website under "External Links".

Credit to Other Mods

(for advice and materials that were originally developed for other mods and are included in RTR, with permission by owners)

A very crude image explaining the history, the Ante-Diluvian era is the period where little to none information is available.

Pre-6.0: The mod had its own forums, however there arent alot of members from pre-6.0 left and so has the knowledge of it.

6.0 Gold, final version for RTW 1.2 and the last version from the original team

RTR: The Iberian Conflict (TIC) for BI. First taste of what VII will be, developed by a whole new team with different visions.

RTR: Fate of Empires (FOE) for BI. Latest version, whole western part of the med. sea. Introduction of many ground-breaking concepts including mini-regions.

RTR: VII. The last and final version for RTW, expanding on the concepts of FOE. No release date as of yet.

YOU can help us improve this Wiki! ~ Look for ways to help and editing advice. ~ If you need further advice, please post here.
Retrieved from "https://wiki.twcenter.net/index.php?title=Rome_Total_Realism&oldid=84216"
Categories: