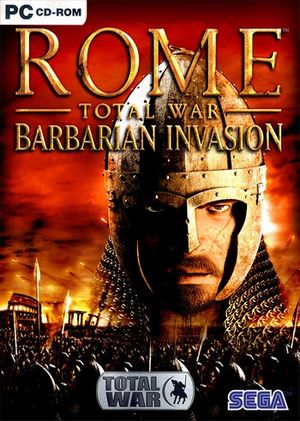 Along with the base game (RTW), it was remastered and included in Total War: Rome - Remastered too.

It is the year 363 AD. After decades of internal strife, the Roman Empire has been split in two. In Europe, Barbarian tribes are on the move, ready and willing to cross the Rhine and Danube and attack the divided Romans. Huge armies of Barbarian Horsemen threaten the once great Empire, as rivalry between the two weakens their borders.

Christianity has become the state religion of the Roman empire. Paganism is still highly prevalent within the Barbarians and much of the Empire, especially in frontier towns and forts. Religion will be a major issue, especially with the resurgent Sassanid Empire's worship of Zoroaster and their persecution of Christians, and the different denominations of Christianity amongst the barbarians.

The factions in Barbarian Invasion are completely new, for the most part. There is still a Persian Empire, but in a different dynasty. The Romans still exist, but instead of three families and a Senate, there are the Eastern and Western parts of the Roman Empire. These two factions are completely separate, and will go to war against each other.

If you are playing in Barbarian Invasion as a barbarian faction, you have a new option.

YOU can help us improve this Wiki! ~ Look for ways to help and editing advice. ~ If you need further advice, please post here.
Retrieved from "https://wiki.twcenter.net/index.php?title=Rome:_Total_War:_Barbarian_Invasion&oldid=85320"
Categories: