The Russians start with one city and potential to expand. Their large steppes can be tough to defend, but they do have a cavalry-oriented army. They also need to be wary of Mongol and Timurid invasions. However if Russia can defend its borders and withstand the invaders the way is open in any direction, with a powerful mobile army. 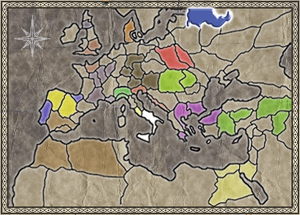 Russia starts with only a single settlement to the far North of the campaign map, near the Baltic Sea.

Used by the Russians, the gulay gorod, meaning 'galloping fortress' is a group of wagons which have been reinforced where possible and are accompanied by hardened well trained troops armed with crossbows and wearing light armor. Used defensively these wagons are formed into a circle creating an effective barricade from which troops can fire upon the enemy in relative safety.

YOU can help us improve this Wiki! ~ Look for Ways to Help and Things to Do. ~ If you need further advice, please post here.
Retrieved from "https://wiki.twcenter.net/index.php?title=Russia_(M2TW_Faction)&oldid=23322"
Categories: