The Scipii are one of the three playable factions in Rome: Total War that are playable from the beginning (the other two, of course, being the other Roman Houses, the Brutii and Julii).

Being one of the three Roman families, the House of the Scipii will receive missions from the Senate, and will be forced to deal with the consequences of not completing them. 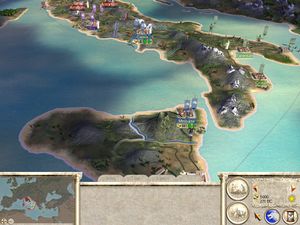 The Scipii begin with control of two settlements, Capua on the Italian mainland and Messana in north-eastern Sicily. 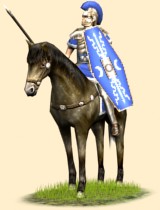 All of the Roman factions share the same unit roster. The Roman factions are unique, however, in that once you construct an Imperial Palace in any of your Italian cities you will receive a message informing you that the Marian reforms have taken place. The Marian Reforms introduce a more powerful roster of heavy infantry units (such as the Legionary Cohort), which replace your older-style legions. Any older units will not be automatically replaced, they will simply continue to exist, but you are not able to train any more.

Corvus Quinquireme: A battleship that is slightly more powerful than a regular quinquireme. Becomes available when you build an Awesome Temple to Neptune in your capital.

Deceres - The most powerful battleship available to any nation. They become available once you build a Pantheon to Neptune.

A campaign strategy guide for the House of Scipii written by fallingsuperspark can be found here.

YOU can help us improve this Wiki! ~ Look for Ways to Help and Things to Do. ~ If you need further advice, please post here.
Retrieved from "https://wiki.twcenter.net/index.php?title=Scipii_(RTW_Faction)&oldid=60414"
Category: