Scotland is a faction located in the north of Great Britain. Despite its position however, it has always been oppressed by England to the south and it is up to the player to make England submit to Scottish rule. Playing as Scotland will yield an interesting campaign with the goal of uniting Britain and capturing the holy city of Jerusalem.

Scotland start far North of the map next to England. 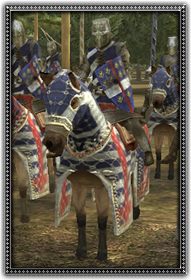 YOU can help us improve this Wiki! ~ Look for Ways to Help and Things to Do. ~ If you need further advice, please post here.
Retrieved from "https://wiki.twcenter.net/index.php?title=Scotland_(M2TW_Faction)&oldid=69745"
Category: