Scotland, along with England (M2TW Kingdoms) remains much the same as the Scottish Faction in M2TW. 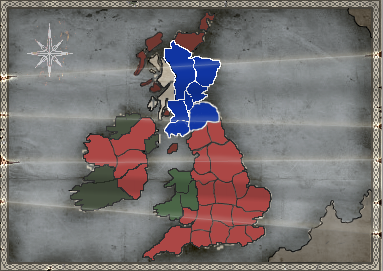 Scotland starts with Perth as its capital as well as a small number of other settlements and castles, including Glasgow, Edinburgh, Dumfries, Inverness, Stirling and Aberdeen to name a few. To the west of the Highlands are rebels. The Western Isles are inhabited by the Norwegian and rebels. The far North in what is now modern day Caithness, is inhabited by the Norwegians. To the South is Scotlands old enemy the English.

The Scotland campaign will be challenging due to the English in the south and the Norwegians in the North. However the abundance of rebel provinces in the west will allow some expansion and provide and opportunity to build up economic and military strength to take on the Norwegians and the English.

At around turn 20-30, the Scottish Hero William Wallace will emmerge with a large highland army. The unique thing about Wallace is that he and his bodyguard are on foot rather than mounted on heavy cavalry. His army consists of-

The main purposes of Wallace's army is either to drive out the Norwegian invaders in the north or to start/continue an invasion of England. It may be a good idea to add some cavalry to the army in order to counter enemy archers that attempt to attack your pike walls.

The Scots have a poor variety of cavalry compared to some factions.

The Scots have access to the normal range of artillery which includes;

The units remain more or less the same as they did in Medieval 2: Total War. This means that your armies will consist of strong and hardy Highlanders, dismounted nobles and a wide variety of pikes and missile units. However Scotland lacks powerful cavalry and gunpowder units.

YOU can help us improve this Wiki! ~ Look for Ways to Help and Things to Do. ~ If you need further advice, please post here.
Retrieved from "https://wiki.twcenter.net/index.php?title=Scotland_(M2TW:K_Faction)&oldid=77123"
Category: