Scythia s one of the factions in Rome: Total War designed to be non-playable. However they can be made playable by simple modifications to the game files (more information on which can be found here). 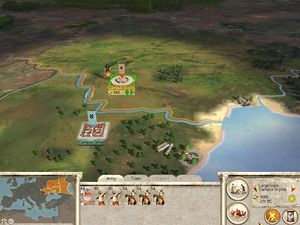 Scythia starts game on the northern coast of Black Sea. They are bordered by Dacia and Thrace to the south, Armenia to the southeast, and Parthia to the east. 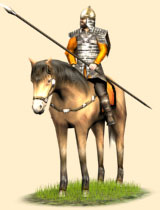 Scythia is a heavily cavalry focused faction; their light and medium cavalry is among the best in the game, and they are strong early game like most barbarians. Scythia is unique in that it get a good horse archer from a simple level 1 barracks; Scythian Horse Archers. From a Stables they get the typical but powerful light Barbarian Cavalry. From the elite Warlords Stables they get Scythian Nobles, an excellent lancer, and Scythian Noble Archers, a strong long range Horse Archer that can fight in melee as well. Scythia also has Head Hunting Maidens, a light cavalry unit that is Armour Piercing and focuses on melee instead of a charge. Their only melee Infantry is Axemen, decent early on outdated later. Scythia gets Onagers and good Foot Archers as well, including Chosen Archers, who fight in melee about as well as Axemen while also having long range arrows.

Head Hunting Maidens: Head hunting maidens are hot-headed light cavalry who are useful against skirmisher and missile troops. They also have armour piercing axes and can be used vs heavy troops except head on.

Scythian Nobles: Scythian nobles are superb hit and run cav if you attack a unit in the flank or rear all enemy units will most likely rout. Hovever they are useless in prolonged combat.

Scythian Horse Archers: Deadly with a bow and highly mobile, horse archers are thorns in the side of many opponents.

Scythian Noble Women: Like the horse archers, noble women can be a thorn in the side of any infantry-based oponent; more so, as they can fight well in melee

YOU can help us improve this Wiki! ~ Look for ways to help and editing advice. ~ If you need further advice, please post here.
Retrieved from "https://wiki.twcenter.net/index.php?title=Scythia_(RTW_Faction)&oldid=83079"
Category: