The Seleucid Empire are one of the playable factions in Rome: Total War. They can be played by successfully completing either a long or short campaign with any of the Roman factions, by destroying them in the Imperial Campaign or by editing descr_strat.txt (more information on which can be found here.)

The Seleucid Empire starts originally with a rather large amount of settlements. They are bordering and surrounded by Pontus, Egypt, the Greeks Cities and the Parthians. They control modern day Jordan, Syria, most of Iraq, and some parts of Turkey.

The Seleucids are a very well rounded faction, one of the most in the game. They have quite a varied roster of units, combining both Greek and Eastern units. Their unit roster includes Pikemen, Cataphracts, Elephants, Chariots, Companion Cavalry, and even Legionaries. They take time to get them all but once they do their roster is excellent, with great cavalry and infantry. Their archers and siege weapons are average. Their early troops, while not the best, are competent and can do their jobs well if their morale is kept in check. 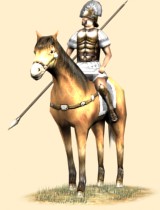 They have very versatile armed infantry, consisting of Greco-like phalanx and Roman-like legionaries.

Silver Shield Legionaries: Local imitations of the soldiers of the Roman Legions. They are as good as Legionary Cohort except for having slightly lower morale.

YOU can help us improve this Wiki! ~ Look for Ways to Help and Things to Do. ~ If you need further advice, please post here.
Retrieved from "https://wiki.twcenter.net/index.php?title=Seleucid_Empire_(RTW_Faction)&oldid=83202"
Category: