Shogun: Total War was the first game in the Total War series and was released by Electronic Arts in June of 2000.

Shogun: Total War, also known as STW, is a history-based strategy game that combines turn-based provincial development with real-time battles. The player assumes the role of one of seven daimyos (Uesugi, Shimazu, Oda, Mori, Imagawa, Takeda, Hōjō) attempting to unite feudal Japan during the Sengoku period ("The Age of the Country at War") and become Shogun. Sun Tzu's The Art of War is central to the game; its precepts are quoted often and its strategies are recommended. 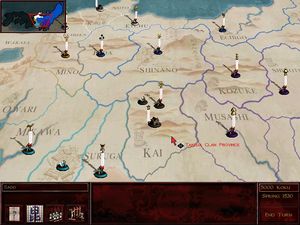 The play involves a strategic phase building up armies and moving them into provinces followed by a real time battle phase. During the strategic phase the players can decide where they are going to move their forces. Afterwards, once the player has issued his commands, the ordered movements are executed simultaneously. The three-dimensional battles are notable for including new aspects such as morale which had usually been ignored by computer war games prior to STW. Many of these features are generally more typical of table top gaming. Sieges are played out using the same engine as the battles in the field. The advantage to the defender comes from the narrow gateway to the castles which prevents a larger force from attacking with more than a small part of its strength.

Some of feudal Japan's greatest battles were recreated based on the expertise of some of the period's leading historical authorities. 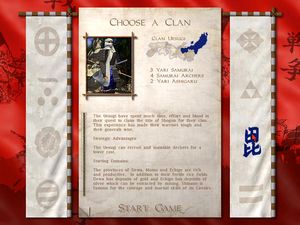 One of the possible faction choices

Campaign map with factions in colorcode

The 7 playable factions in Shogun, with their faction colour:

Each of these factions has an identical unit roster, but all receive a bonus (usually in the form of a discount) in training a particular unit.: For example, the Uesugi faction recruits Samurai Archers at a lower cost than the other factions.

The unit roster in Shogun Total War is small in comparison to the later games, with all factions in the original game sharing the same unit roster. However each faction receives a discount on purchasing a particular unit, and furthermore some provinces grant an experience bonus to units of a particular type recruited there. 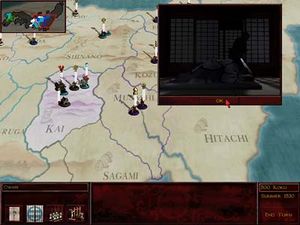 A video plays after a ninja has attempted a assassination.

One of the possible new mongol units

The Mongol Invasion expansion added a new faction and with it a set of new units:

Shogun Total War had one expansion, Mongol Invasion. Its main addition was to add a new campaign set in 1230, hypothesizing a successful Mongol landing in Japan. This campaign had only 2 factions, the Hojo (possessing all of Japan) and the new faction, the Mongols. The gameplay of this campaign was notable in that the Mongols were unable to recruit troops in any conquered provinces, but instead had to rely on reinforcements periodically appearing in coastal provinces to replenish their troops. In addition to this campaign, the expansion also added "eras" to the original campaign, as well as several new units and Historical Battle Campaigns, Campaigns played through Historical Battles.

YOU can help us improve this Wiki! ~ Look for Ways to Help and Things to Do. ~ If you need further advice, please post here.
Retrieved from "https://wiki.twcenter.net/index.php?title=Shogun:_Total_War&oldid=64255"
Categories: