Spain is one of the factions in Rome: Total War designed to be non-playable. However they can be made playable by simple modifications to the game files (more information on which can be found here). 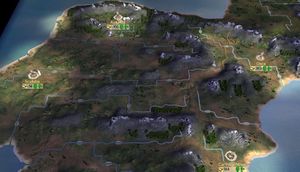 They start occupying half of Spain on the Iberian Peninsula. They are bordered by Carthage and Gaul. 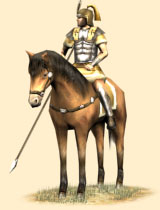 Spain is an heavily infantry focused faction, because of their Bull Warriors, an extremely useful light infantry unit with 2 hitpoints that can form a very strong battleline. Bull Warriors essentially make the faction. Their cavalry is decent early on but falls behind a bit in the late game. They have no Spearmen worthy of mention. Their missiles are very poor except for Balearic Slinger Mercenaries. Their early roster is quite weak, similar to Carthage except with the addition of Naked Fanatics.

Bull warriors: Bull warriors are men whose bravery, stamina and skill are unmatched. These elite fighters are shock troops.

YOU can help us improve this Wiki! ~ Look for Ways to Help and Things to Do. ~ If you need further advice, please post here.
Retrieved from "https://wiki.twcenter.net/index.php?title=Spain_(RTW_Faction)&oldid=83194"
Category: