The Holy Roman Empire is an unlockable faction in the Teutonic Campaign in the Kingdoms expansion for Medieval II: Total War.

HRE in the Teutonic Campaign 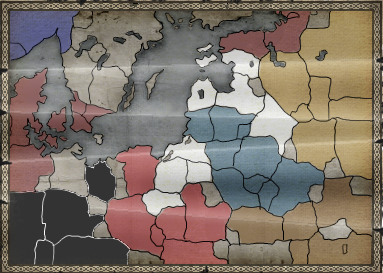 The Holy Roman Empire begins the game in what is now modern day Germany, which roughly corresponds to the southwestern portion of the campaign map. This means that the HRE, similarly to the Mongols, lack most of their land, as it is off-map. Due to the scale and size of the map however, the regions included are more than enough for the Holy Roman Empire to expand and become a strong faction. Denmark borders them in the North, and Poland in the east. There are also a few rebel regions nearby, which allow for some easy early-game expansion.

The Holy Roman Empire has a potential to become an economic powerhouse. They start with strong cities, and a gold resource in Prague. When a mine is built there, cash will start flowing in.

They have the same units that the Holy Roman Empire had in Medieval II: Total War. Generally a very varied roster, albeit lacking in the very strong late-game units.

In the beginning of the game, the HRE starts out with the southwest portion of the map. This makes it very hard to expand, as your cornered by Denmark and Poland and have to contend with them for the one or two rebel settlements you actually CAN capture. You have on advantage over these factions, your power in your units. The HRE have the same units as in M2TW, use them wisely. Heavy cavalry will be very useful against the danes early on, and your spearmen against the polish. Also, if your going to expand, go north first. The Denmark usually are weak to start of the game. Try to do this before they make relations with anyone else, especially Poland. Once you either expand up north, or east into Poland, the only major problem you should face by then is Novgorod.

YOU can help us improve this Wiki! ~ Look for Ways to Help and Things to Do. ~ If you need further advice, please post here.
Retrieved from "https://wiki.twcenter.net/index.php?title=The_Holy_Roman_Empire_(M2TW:K_Faction)&oldid=73907"
Categories: