The Teutonic Order are a playable faction in the Teutonic Campaign in the Kingdoms expansion for Medieval II: Total War.

The Teutonic order is a new faction in Medieval 2 Total War:kingoms and is a Medium-difficulty faction to play in the new Teutonic campaign. It has a divided empire that can be reunited quickly, and can blitz Lithuania, however later in the game it will find itself surrounded and having no Allies. In general preperation must be made for this period of time in advance so that you can withstand the might of every other faction attacking you. You have very powerful units, both in terms of backbone and elite. You can field order spearmen and Ritterbrüders and the mangonel. You have no weaknesses basically speaking except that you will have no light infantry. Also you have a disadvantage that you can make only castles, cities are forbidden to you. Your faction leader is picked based on authority, the most authoritive is picked and becomes leader. 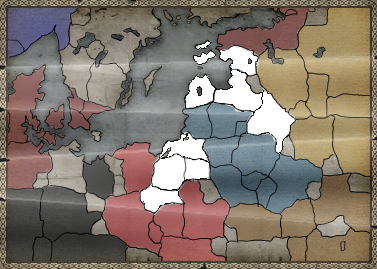 On the Baltic coast in the area now occupied by the countries of Latvia, Estonia, and Russia (Kaliningradskaya/Prussia)

The Southern Position and the Cities There

The Teutonic Order begins with some cities and an army in this region . The bulk of their initial military might and their most advanced castles exist here. They are close to Poland and Lithuania, and to an extent the mongols.

The Northern Position and the Cities There

The Northern position is considerably less advanced, but has 5 cities. However there is no army for use in this region. They do however have Riga, a relatively advanced city as a exception. This area is in proximity to Denmark, Novgrod , and Lithuania

The Teutonic order begins at war with Lithuania.

Hanseatic League Headquarters( City or Castle) Increase global trading economy throughout your realm for every city you control. This Headquaters costs 4000 florins to build and is offered as a guild if you get the relevent cities which increase the points towards you goal of getting it. Only one can exist in the campaign map. The person who owns most of the following cities gets to build the HQ. Riga, Novgorod, Hamburg, Danzig, and Vilnus.

Allows the recruitment of diplomats and spies. Also on the upgrade diplomats, spies, and assassins.

Crusading Nobles appear at certain turns if your not allied with Lithuania and Lithuania has not converted. The first is English, the second French, and the third is English again.

It is vitally important for The Teutonic Order to unify itself and capture the cities between their two areas. It's advisable to use the Crusading Generals to conquer them, especially because they give you much-needed florins at the end of their mission. Try and declare an alliance with Poland and Denmark. After Lithuania, taking Novgorod would be a good move because of their power. Destroying the Mongols will also rid you of a serious threat. However, don't be greedy and overstretch, especially when your elite units can't come without converting the settlements.

Poland generally makes an attempt to form an alliance with you quite early on, however be warned that they will eventually betray you so make sure your cities on the Poland border are sufficiently garrisoned. The same applies if you allied yourself with Novgorod.

You should also be aware of Danish attacks on your northern territories. An invasion of Scandinavia early on could easily strengthen your forces and give you a more defendable area should you be overwhelmed on mainland Europe. Also, an early alliance with Denmark can at least delay their attacks.

You should also try to get the Hanseatic Guild Headquarters, which will increase your trade and increasing your Florins income! This will be vital for the war against Novgorod, Lithuania, Poland and the Mongols.

Links to AAR's and Guides

YOU can help us improve this Wiki! ~ Look for Ways to Help and Things to Do. ~ If you need further advice, please post here.
Retrieved from "https://wiki.twcenter.net/index.php?title=The_Teutonic_Order_(M2TW:K_Faction)&oldid=73910"
Category: