The new game is a remaster of the 2004 Rome: Total War game by Creative Assembly. The game is available for Windows retailing through Steam. Mac and Linux, versions will retail through the Mac App Store.

The starting date of Rome does not make it possible to give one accurate experience of the Rise of Rome and subsequent wars but rather allows for the Carthaginian, Gallic and Macedonian wars to play out from the same starting date. The later period of instability and Civil Wars of Caesar and the Triumvirate are the inspiration behind the endgame civil war mechanic.

The Senate is a non-playable Roman faction which loosely represented the autonomy of the Senate and holds the province of Rome. Players can earn standing with both the Senate and the with the people of Rome as part of the Civil War mechanic, the senate also issues missions to the player similar to those present in Rome II total war. Non-Roman players do not receive these missions from another faction but from a similar elders mechanic. Players could not Unlock the Senate in Vanilla Rome. This sub faction change was removed by many prominent Rome Total War mods and was also subsequently abandoned in Rome II. The different Campaign experiences were released as DLC in later games. The senate is playable in the Custom Battle mode

Originally players could unlock other factions by either conquering them individually or winning the campaign. The ultimate goal of the campaign was/is to become emperor by conquering fifty provinces, including Rome. A short version of the Campaign existed in which the player had to take control of fifteen provinces and outlast a certain faction or factions. Players now have the option of unlocking all factions without playing as a Roman faction first. 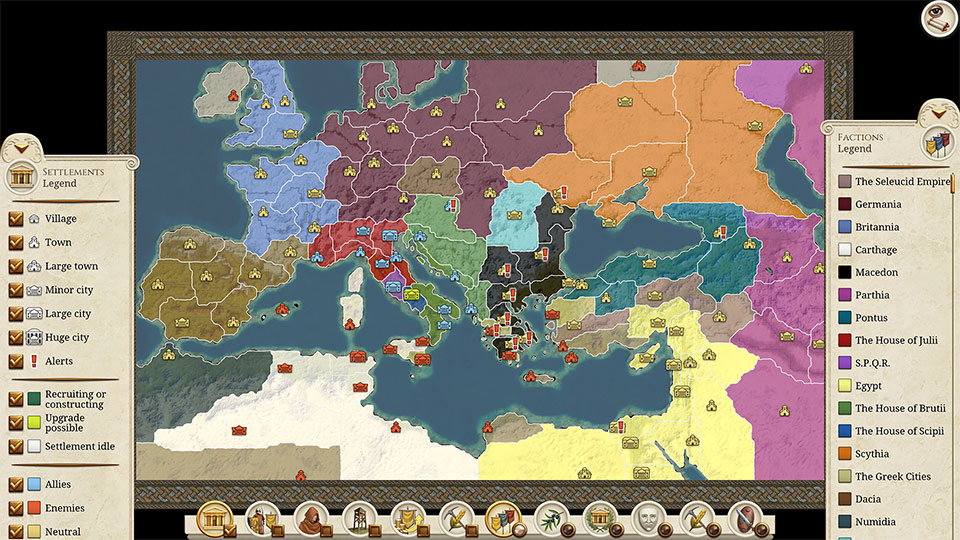 The BI factions are follows -

A Q&A session with the Feral Dev Team and CA members was held on Discord on 31st March 2021. Simone of CA stated that they do not currently plan to remaster any other classic TW titles. Feral stated that they will support the game post-launch (e.g. with patches).

The answers about RTW Remastered features are roughly summarised in the sections below:

Negotiations have a concept of long term relationships.
The AI can be more decisive.
You're more likely to be able to convince a small faction to become a protectorate, but they may turn on you if there's a better option.
AI will now attack across seas.
Diplomacy includes the concept of settling debts, financial and territorial.

Batching and instancing for unit rendering
Instancing and LOD system for buildings
New mesh and texture setup and texture streaming system
New improved renderer, which will have modder adjustable parameters added at, or shortly after, release.

YOU can help us improve this Wiki! ~ Look for ways to help and editing advice. ~ If you need further advice, please post here.
Retrieved from "https://wiki.twcenter.net/index.php?title=Total_War:_Rome_Remastered&oldid=84903"
Categories: