Mods can be uploaded and used from the Steam Workshop, the placing of those mods on your computer will be determined by Steam and your library set-up, for example a mod's file could be in:

Mods in development can be placed in the 'Mods' folder either in Local Mods or My Mods, the full path to these folders is normally:

If you have a small C drive and need to relocate this elsewhere you can use a hard-link on your computer, hopefully, the launcher options will later allow an easier way to change directory locations!

Within either Local Mods or My Mods you will then have a folder for Mod_Name. Within Mod_Name folder you need the mod's data folder a modinfo.json and a filelist.json

This file you write yourself and it gives the name and description of the mod, a sample format is:

This is referred to as the 'manifest' for the mod. To generate this file - or regenerate it if you have changed files - select the mod and click the "Regenerate Manifest" button on the Feral launcher.

If you add files to the mod and fail to Regenerate Manifest your new files will not be loaded. If you try and run a mod without any manifest you will just get the vanilla game!

Version 2.0.2 has introduced a comprehensive error logging system. To activate basic logging to text file use enable_logging in your Launch Options. Log files will be generated in:

You can also use:

Additionally "EnableBattleModelInfo" can be activated from Preferences Data to view the assets a battle model is using.

There are numerous small and large changes to the files and file structure of Remastered in comparison to RTW. The changes are centered around:

Feral's Differences & New Features page details the changes to date including 2.0.2 patch with information about currently increased limits and targeted changes for version 2.0.3.

Some textures are compressed using the LZ4 system, these also have an additional header section which can be ignored. IWTE now has an option that will de-compress a directory of these textures back to their starting .dds state.

Some textures are DX10 type, these you can probably open but not see the correct information, if you have a recent version of Photoshop you can use this plugin to open them. Otherwise, you need to convert them to .tga using the Texconv tool or similar. The easiest way to use this tool is by writing a .bat file (so you don't have to remember the commands each time!), and example .bat would be:

Fortunately, the game will accept and run happily with non-compressed DXT5 and DXT1 dds textures in the same way as RTW, so you only need to mess about with the above if you need to view or amend some of the existing textures.

RR has introduced a system of Physically Based Rendering for textures, thus the 'normal' textures that have been introduced with RR work slightly differently from the ones in M2TW:

A .pvr version of the radar map is used, to open this file download the PVRTexTool or similar.

One of the areas modders' have been most worried about was whether the game would support completely redesigned maps now that a model mesh system has been introduced for the campaign map. Although this looks like the vanilla shaped map, it's actually partway through porting a version of the Mundus Magnus large map for RTW (originally by ngr). 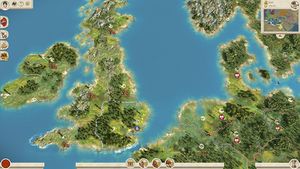 The below picture demonstrates the difference between what you might see on the campaign map and in battle if you don't deliberately align the two:

The left part shows the campaign map on a modified section of mesh. The area shown in green, where the army can move, is controlled by the map_heights.tga, map_ground_types.tga and map.rwm information. Where he would actually appear to stand is controlled by the heightmap .bin file generated from the mesh, so he will walk up that big lump, but he won't go below 0m (sea level), even though the mesh is below the water surface there. The second part of the picture on the right shows what you actually get at that spot in battle, which is based on the map_heights.tga, map_ground_types.tga and map.rwm information, plus interpretation from the vegetation and geography.db files.

Similarities to the original system:

A quick look in the data/world/maps folders will reassure RTW and M2TW modders that the map image and text files they are familiar with are still there. If you have a 'pure map' mod you should be able to use your existing map_heights.tga, descr_strat.txt etc to launch a mod for Remastered without much problem. If the mod has modded units, buildings, ancillaries etc, it will take more unravelling, just as porting a map between different mods would. If you try to copy in all of your mod's files you will probably find either some conflicts, or that you have overwritten new features in Remastered such as the addition of traits and ancillaries to support the new Merchant agent type.

That's the good news... your basic map files are still valid! The basic files drive the campaign map pathfinding, placement of settlements and resources and provide the climate/heights/ground_types information that is translated using the vegetation and geography.db files to make the battle maps.

The not so good news, if you were after a quick result, is that they don't generate the mesh or textures you view on the campaign map! So if you load a map of a different size or shape the areas not covered by the existing mesh, or already on raised land areas, will just appear as sea! They will function, and the trees and settlements will turn up, and your troops will be able to move on the parts supposed to be land... so if you ever wanted to do a mod based in the Everglades, this could be for you.

To unpack unit models from Rome Remastered packs you need to use the unpack_characters option when launching the game .exe

The .cas files you generate can be converted for editing in Blender or 3dsMax. You can use:

Please be aware that each of the tools may have different default scaling and orientation, so you should not combine import/export across different tools.

Although still .cas files the RR units use the 'type 3' chunk system previously only used for some shoulder pads and minor elements of RTW units using the model_flexi_m system. The main body of the unit can have vertexes weighted variably between any two bones for the lod0 model, the lod1 model and lower need to have single bone weighting throughout. Primary and secondary weapons must still exist within the .cas as a separate mesh and use only one bone.

Only the base .cas name is given for the model in the DMB file the game looks for and needs four model .cas files for each model named:

If you haven't got 4 different lod level models, copy the closest one you have and re-name it to suit.

The uv mapping of the units is now used to provide the variation across faces and skin sections to suit ethnicity, details of the uv system and requirements for conversion with the CasPacker tool can be found here

Some of the text displayed in game isn't read from data/text folders, it's from

these strings can be changed and included in a modfolder @

example shown is for English the same principle applies on other languages.

Instructions are contained in the readme.txt inside data/string_overrides:

As an example the text seen on buttons and on the main menu selection items is in the Localizable_Game.strings, however, other parts of the menu text can be found in data/text/menu_english_stm.txt and language variants.

YOU can help us improve this Wiki! ~ Look for ways to help and editing advice. ~ If you need further advice, please post here.
Retrieved from "https://wiki.twcenter.net/index.php?title=Total_War:_Rome_Remastered_-_Modding&oldid=85537"
Categories: