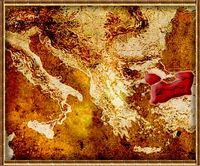 Map of Tsardoms. Ottoman Empire is in red.

Tsardoms: Total War is a M2TW and Kingdoms modification that focuses on the Balkan, Near East and Italy starting from rise of Tsar Stefan Uroš IV Dušan in 1345 and concluding in 1530. It allows you to control more than 20 factions, with unique units for every faction. It is fully historical with historical events like Rise of Serbian Empire, Fall of Constantinople, Ottoman Conquest, Aragon rule over Naples, Hungarian struggle against Turks and many more. As in history of Balkan States, religion took great influence, so does in mod, where religion can turn diplomacy in the whole new way. As it takes place on Balkan, Italy and Near East, you'll be able to see units which was never done in any mod, unique units by their historical facts, cause of the influence of many cultures, and also included mercenaries in whole new way, as it was historical, mercenaries will be able to be bought by alliance or trade rights with neighbor states. Be ready to control unique armies, heavy armored mercenaries, to influence by your religion, be ready for TSARDOMS: TOTAL WAR!

The idea was first proposed on TWC on the 8th of September 2007, when phoenix opened a thread in which he explained how CA had mostly forgotten about the Balkan area in both M2:TW and the Kingdoms expansion. And proposed to make a mod that focussed entirely on that region. Not long after that he made a thread about his mod in the org on the 27th of October 2007. A staff had already been collected and work had begun.

YOU can help us improve this Wiki! ~ Look for Ways to Help and Things to Do. ~ If you need further advice, please post here.
Retrieved from "https://wiki.twcenter.net/index.php?title=Tsardoms:_Total_War&oldid=81184"
Categories: