Welcome to Empire: Total War on the TWC

Empire: Total War is a game in the Total War series developed by the Creative Assembly.
The game was released in March 2009 and published by Sega. It is set in the 18th century and includes features such as the Industrial Revolution, America's struggle for independence and the colonization of India. For the first time in a Total War game, players have the ability to play real-time 3D naval battles. Another feature that had been developed in the game was the decentralisation of provinces, adding greater realism in that many features, from production to technological advancement, would now occur outside of the capital of the province. It was the first in the series to use Valve Corporation's Steamworks DRM and achievements system, thereby requiring Steam to be played. It was the first to use Total War Engine 3 which included the Warscape Engine.

The Warpath Campaign was released as downloadable content in October 2009. The campaign focuses on the battles of the Europeans and Native Americans throughout most of North and Central America. It expanded the North American territories and featured 5 new playable factions: Iroquois, Cherokee, Huron, Pueblo and Plains Nations. New researchable technologies were also added, along with the new scout and shaman agents and new faction-specific objectives. Other DLC's were; Elite Units of the East | Elite Units of America | Elite Units of the West| Special Units & Bonus Content

In November 2018 Empire: Total War was upgraded to the Definitive Edition meaning that all existing and new purchasers will have all of the DLC included free of charge.

Imperial Splendour - Rise of the Republic

Imperial Splendour have released a new beta for their v1.2 to mark the 10th anniversary of Empire: Total War's release. While The Northern Wars Update is still under development the new beta will allow you so see many things that will be in v1.2. Amongst other changes new units for the Danish and Russian Armies are included and some special new ships can be built. Cultural changes mean that some factions can now have their own unique campaign map models and 130 recruitable historical characters have been added. Read all about it and get the download here. 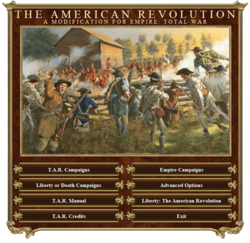 The American Revolution Mod are also planning to release a 10th Anniversary Edition. Version 3.0 is planned to include new units and a massive re-skin with new campaigns and features. They have asked for "a few good men" to help with 2d art and testing, apply here.

Meanwhile a new version 2.0 was released in January 2019 and is available to play. The update adds numerous fixes and updates to the award-winning mod which covers the American Revolutionary War from 1775 till 1783. Download version 2.0 here. 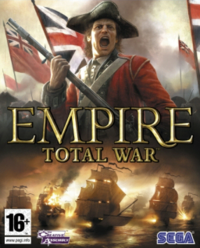 Empire: Articles in need of Cleanup