This article is based on research of Medieval II Total War. It has not been confirmed whether or not Rome Total War uses the exact same system. The data in the following tables is hardcoded and can not be modified (without the use of external programs).

The faction header in descr_strat.txt contains what we will refer to as an "AI Personality". It can look like this:

These biases are towards building properties, rather than buildings themselves. The game does not know what a "Blacksmith" is, for example, it only knows that it is a building which provides a weapon upgrade, and hence a craftsman AI would be more likely to build it than most other AI personality types.
The available first names are:

The following list of building properties have a weight of 0 in all 8 first names and have been excluded from the above table:

This one is a bit more complex, so read carefully.


When the unit database (EDU) is loaded, the game combines unit category and class to know which weight to apply. It also calculates a value for the unit that is based on a unit's stats. Note that I say value, it has nothing to do with cost or upkeep (!). This value can not be seen anywhere in the game without the use of external programs. Soldier count has the biggest impact on a unit's value. That is why large units tend to get recruited more often than small ones, which can be amended by using recruit_priority_offset in Medieval II Total War: Kingdoms. It has to be stressed that this unit value is far more influential than the preferences set by the AI personality. For example a stalin personality will still prefer a very good light infantry unit over a bad heavy infantry one. These biases only come into full effect when units are of equal or similar value.
The available second names are: 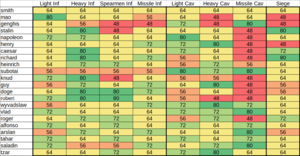 YOU can help us improve this Wiki! ~ Look for ways to help and editing advice. ~ If you need further advice, please post here.
Retrieved from "https://wiki.twcenter.net/index.php?title=AI_Personalities&oldid=84399"
Categories: