Broken Crescent is a modification for Medieval II: Total War.

Broken Crescent is a Total Conversion modification for Medieval II: Total War. It is among the most popular M2TW mods and features a brand new campaign map, a multitude of new units and factions, new religions, a "Titles" system and an AOR (Area Of Recruitment) system . It is centered around the Middle Eastern warfare during the period between 1174 and 1400 AD.

In the 3.0 version, the following factions make an appearance

Broken Crescent features a brand new campaign map spanning from Constantinople and Egypt in the west to Northern India and Afghanistan in the East. It encompasses all the classical and iconic lands of the Eastern and Islamic world: Anatolia, Egypt, the Holy Land, Syria, Persia, Arabia, Georgia, Cilicia, Mesopotamia, Khwarezm, Khorasan, the Indus and India. 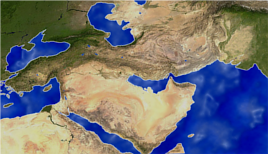 Broken Crescent features an Area of Recruitment system. Each faction is assigned its own unique "home regions" in which it is able to recruit units from its factional roster. In the regions it conquers, it is only able to recruit local units and other special variations. More detailed information on the AOR system can be found in this post.

The modification features the Christian and Muslim religions, which predominate in the modification's campaign. In addition, there are also newly added Hindu and Pagan factions, each with their own new temples unlike the Christian and Islamic churches and mosques. Since religion is important in this time period, the kingdom of Jerusalem can call crusades to aid them if cities like Acre, Jaffa and Jerusalem itself are taken. The Islamic civilizations can call jihads on other factions to reclaim taken lands. They can also train special units only available during a jihad.

Broken Crescent features a system of "Titles" which brings an additional level of immersion and realism into the gameplay. Certain titles are based on the ownership of regions, while others can only be attained by killing the present holder of that title. The Abbasids, for example, begin the game with their faction leader assigned the title of Caliph; this title is hereditary; but if another faction leader defeats the Caliph in battle, he will gain the title.

Broken Crescent features hundreds (250+) of completely new units made from Scratch by the skinners AlphaDelta and Strelac. The differences and variety of looks within a unit are seen far more, rather than minor differences, and the faction is balanced and unique with each having its own set of strengths and weaknesses.

A detailed list of all BC developers and contributors can be found here.

YOU can help us improve this Wiki! ~ Look for Ways to Help and Things to Do. ~ If you need further advice, please post here.
Retrieved from "https://wiki.twcenter.net/index.php?title=Broken_Crescent&oldid=79425"
Categories: