He was made Junior Moderator by one of the ex-Administrators of the forums, Empress Meg. Meg is also the patron of Carl and regards himself as the brother of Guy.

Carl is also a Local Moderator for Total War series Modifications: God Save the King, The Lion From the North, English Civil War - Destiny Our Choice, Tribus Barbarorum and European Wars.

He has also achieved the title/rank of Content Writer for the Eagle Standard, and is a keen historical debater, with interests in the 17th century. 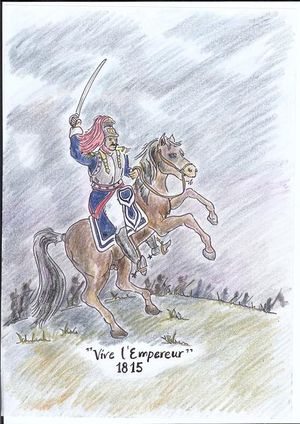 One of Carl's many drawings.

Carl is a big fan of the fine works of art and has contributed with a lot of his own drawings. His work can be found in his own album, My Art. His work ranges from Spartans to Teutonic Knights and even random scribbles.

He has also helped many members of the community with historical research for diffrent modifications and is regarded as one of the friendliest members of the forums.

Carl or should I say, Simon, is one of the sites few Swedish members. A very proud Gaetish man, he is a icon in the Swedish community of Total War Center.

YOU can help us improve this Wiki! ~ Look for ways to help and editing advice. ~ If you need further advice, please post here.
Retrieved from "https://wiki.twcenter.net/index.php?title=Carl_von_Döbeln&oldid=79519"
Categories: